I arrived at Indumathi's house at twelve in the afternoon. She'd been waiting for me, ready with a fresh cup of coffee. She leads a JLG, consiting of four more women, in a village called Salappatti, which is some 40 kms from Tiruchirapalli. All the women have taken the loan to buy goats. She is a tailor by profession. She has set up her own shop in the nearby town, Musiri, and employs two more people under her. She makes close to Rs.10,000 in a month from tailoring. I felt very guilty for making her miss that day's earnings, but she just smiled and said she was glad I'd come to meet her.  Her husband works in the finance department of a company.  She has two boys, both studying in private Matriculation schools. The elder child is studying in 2nd grade while the younger one is in UKG. She told me she was adamant about sending them to private schools as she wants them to have the best education she can offer.

After I finished my cup of coffee we went to see her goats. She'd bought one male and two female goats with the help of the loan amount from GMF, funded by Milaap. Now, the female goats have each given birth a kid. The female goats deliver every six months. The male goats, once they are old enough, will be sold for its meat and will fetch her at least Rs 6,000. The females goats will be sold for close to Rs.7,000 for the purpose of giving birth to more goats. While she is away for work, her entire family takes care of the goats. She also had a really old male goat, that refused to be clicked in the photograph and was also about to knock her down. She said she is going to give that away as an offering to the Gods in the nearby temple. It was wonderful to see smile beautifully when spoke of her goats. The loan has helped her secure a source of income and will certainly assist her in paying for her children's education. On my way out she plucked a few tamarinds off this huge tree at the entrance of her house and handed them to me. They tasted absolutely wonderful, so, I promised her I'd be back to get some more.  She was thrilled that I liked them. It felt wonderful to spend time with Indumathi.

Indumathi with her lovely goats 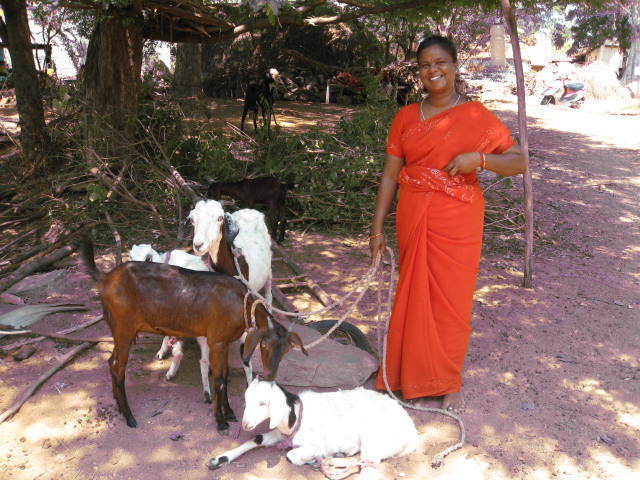 Indumathi with her lovely goats