Shares
Shares
Share on whatsapp
The monsoon season has been in full force the past couple of weeks. Most of the rural roads have turned into slick obstacle courses, where a dip in one of the many potholes will make for quite a jarring ride. The auto-rickshaw drivers that traverse these roads have no problems with the conditions and for the most part the ride is quite comfortable.  I myself was dressed head-to-toe for the weather, and was ready to meet Mrs. Innahar Molla and see how she and her family were doing.
I met Sourav, the Jaynagar branch manager of DCBS, and we finally arrived at the small compound where Innahar Molla and some of the other women in her group meet with one another and do their work. Most of these women are involved in the "Chikan & Jory" embroidery trade, which is a very labor intensive process that produces stunning and shimmering designs on various types of clothing.
Innahar and many of the other women seated around her told us that initially the main reason they took the loan for a solar lantern was that the constant power outages hindered their ability to work on their embroideries, because the delicate process requires a lot of light. However, they soon realized that these solar lanterns were so convenient and mobile that just about every kind daily activity like cooking and cleaning was easier to accomplish during the long power outages.
Innahar has two young boys and two young girls, and raising these precocious children has been quite a handful. She told us that she does not have to constantly monitor their activities, because they are using the solar lantern rather than a dangerous kerosene one. Overall, Innahar and the other women in her group were very pleased with the convenience and peace of mind that these solar lanterns have brought them. They told me to personally thank the wonderful people around the world that were able to empower them to succeed and not be afraid of the dark. 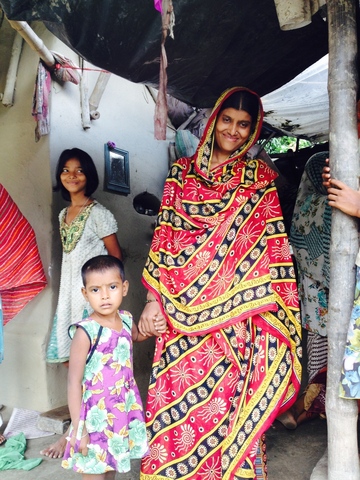 Innahar standing with her young daughter, while her elder daughter smiles from behind