How Geeta grew her savings 5 times over in 2 months

With the sun gliding towards its zenith, it appeared like a dazzling globe of light. That Thursday had just started. But the excessive heat was making things unendurable. And the journey to Geetaben’s house was a perpetually long one. After travelling for so long, here I was in one of the interior regions of Chandkheda, a neighborhood of the metropolitan city of Ahmedabad in Gujarat. Fatigue seemed to be taking a toll on me. I let out a sigh of relief upon finally reaching her house.

I was here today to check on the progress of Shiv Mahila Mandal, a group being led by Jayshree, after they had borrowed an enterprise loan from the Milaap community of lenders. But as Jayshree was too busy that day, so Geetaben was one of the other members of the group that I met.

Geetaben, a woman in her thirties, has been running a provisional store, which is located at the back of her house for five years. With her loan of Rs. 10,000 from Milaap, two months back, Geetaben could restock her store with a lot of additional goods. Now, she is able to save a fixed sum of Rs. 5000 on a monthly basis, which is incredibly commendable as it is five times more than what she could save earlier. The loan has benefitted her in many ways. Not only did it increase her income, but she is also able to save more even for her son’s education, who wishes to be a real estate entrepreneur.

Geetaben expressed her gratefulness for the loan provided. This change in her life wouldn’t have been possible without the support of lenders like you. 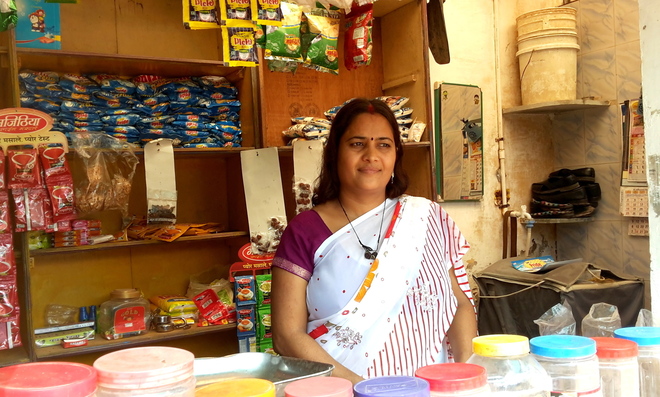 Geetaben at her provisional store