After losing her mother, this doctor in Delhi dedicates her life to helping Alzheimer's patients and their caregivers | Milaap

You are sending a message to
Harish Chawla
Go back

After losing her mother, this doctor in Delhi dedicates her life to helping Alzheimer's patients and their caregivers

Shares
Shares
Share on whatsapp
It starts with small, innocuous things – we're prone to forgetting with age; not as sharp as before. It is repeated often like a mantra to ward off something worse that might be lurking in the future. Alzheimer's Disease and Dementia are those fears given name. They strike silently siphoning off all the mental functions that makes up a person.
Alzheimer's has a frightening incidence rate of 1 in 5 in people in those over 80 and one in 20 in those aged over 60. India has 3.4 million people with Alzheimer's and dementia. A number, that is bound increase over the next few years with 17,000 people retirees per day in the country.
Early onset is often explained away as age
Dr Sushma Chawla is a gynaecologist from Delhi. Her mother was a doting, cheerful presence in her life. She reasoned that it was her father's recent death that had caused her to be uncharacteristically quiet. Her sisters, who lived abroad, said it could be loneliness.
Sushma giving a talk about Alzheimer's in Delhi
She started dreading the dark and while she still organised grand lunches for her family, she politely declined dinner with the family. She started to forget her keys and came out of the bathroom without taking a bath. “Little did we know that it was Sundown Sydrome. She was irritable sometimes, but she was still always happy and eager to see me at lunch,” Sushma says.
Sushma was 48 and had her own practice and family, but she visited her mother every day. She was sad that mother's mental health was deteriorating but didn't think it warranted medical attention. In July 1999, her mother fainted and fell down. By now very alarmed, Sushma brought her home.
Sushma with her mother
The doctors did their best and the neurologist diagnosed her mother with Alzheimer's. In the next six months, the deterioration was rapid and she passed away very peacefully in December. Sushma was full of questions at her death. Despite having done her best, she kept thinking of all the other things she could have done.
Offering solace to others like herself
She started meeting other caregivers who were looking after their aging parents. She found herself extending moral support and counselling to anxiety-ridden caregivers. In 2001, she even gave an interview in the Times of India that gave out her number.
That evening, 235 families from Delhi and outside contacted her. She and her husband took these calls and decided to meet each one of them offering them what help and solace they could. It took her six months to meet every family.
Sushma and her husband Harish have been instrumental in forming a caregivers support group across Delhi

“We came in contact with so many people who were going through the same pain as me. We had formed a support group and my husband registered our group as an NGO under the name Hope Ek ASHA,” says Sushma. It was a voluntary organisation that would care for Alzheimer's patients and their caregivers.
“Asha, was my mother's name and my husband felt that this way I could keep her memory alive in the most positive way,” she explains.
Red flags for early detection
Sushma's dedication to help out and support people caring for family members with dementia and Alzheimer's is as strong as it was 15 years ago. She still patiently takes a call to walk some very stressed caregivers through their small daily tasks. To Sushma – this was her as she fretted over her ailing mother.
She gives talks on the importance of watching out for red-flags in aging family members. “Early detection is very crucial. Family members must watch out for red flags like – forgetting the name of people they meet daily, recent memory loss and keeping things in inappropriate places such as keys in the fridge,” she says.
Early detection would seem a person's best fight against Alzheimer's and dementia.The condition is incurable and irreversible. “If detected in the early stages a person can enjoy up to 15 years of near-normal life. With drugs to manage the condition, it can mean an additional 5-6 years depending on the person,” Sushma says.
That is the most chilling aspect of the disease. It varies from person to person. There is no saying what one can expect. Stimulating the brain through socialisation is the one thing that has proven to be factor that keeps brain regression away.
A day-care centre for prevention and maintenance
Hope Ek Asha is looking for funds to open a day-care centre for Alzheimer's patients. The initiative is supported by their strong volunteer base. “Many of our volunteers are people who have taken care of an aging, ailing parent. They now themselves are retirees. A day care centre will be good for them to give something back and feel like a valued, wanted member of the society,” Sushma says.

Your donation can help Sushma and Hope Ek Asha's volunteers continue their selfless work. Every contribution you make will be matched by Portea medical to double the value of your donation. 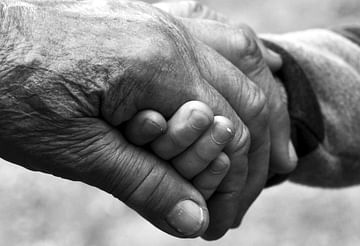 Help build a day-care centre for Hope Ek Asha and help hundreds find solace in their most...