“A farmer only sees loss all his life. While my son is in the hospital with cancer and I am in another hospital looking after my father, rain has destroyed my crops. I have no choice but to save them both, but with what?.” - Srinivas, Hema Srinivas' father.

5-year-old Hema Srinivas' parents wanted to send him to school this year. Instead, he is in the hospital, fighting a deadly form of blood cancer. His treatment has already been delayed by months and he needs intensive chemotherapy to beat cancer. His parents are daily-wage workers who face a terrible reality – saving their son through crippling poverty.

Hema was looking forward to school – but cancer became his future

Because his mother was pregnant with his sister last year, she decided to send him to the Anganwadi center in their village, KB Palem, instead of the school. Barely six months in, he became very sick with fever. When the fever did not go away for over a month, his parents decided to take him to a doctor in the nearest town – Guntur.
The happy family before tragedy struck them on Hema's first birthday

“Doctors gave us medicines and he would get better. In a few days, he would get a fever again. We went to every hospital in Guntur and Vijayawada for the next two months. Finally, here in Vijayawada, they found that something is killing him.” - Sumitra, Hema Srinivas' mother.

Sumitra is alone in Vijayawada taking care of Hema

Sumitra starts crying when she thinks of her 8-month-old daughter Nitya. Even before being weaned off her mother's milk, Nitya had to be left with her grandparents. Sumitra is with Hema while Srinivas is taking care of his father who met with an accident. She perhaps echoes her own longing to go home when she consoles Hema.

“I tell him to stop crying, we'll be home soon. But he only asks me how will we go – he still has the abbu (illness) making him sick. Everyone loved him – he has three toys and he used to play quietly with them. He was happy, he never asked for anything. Why should this happen to him?” - Sumitra.

More than anything, the family fears to lose Hema to cancer

With a lot of difficulties, the parents got Hema's chemotherapy treatment started. While it is too soon to even show results, they have run out of all funds. Srinivas has exhausted all his resources and spent close to Rs 3 lakhs on treatment. Night and day, he and Sumitra think about what will happen if they cannot afford Hema's next injection.

“When the doctors said the treatment will cost Rs 10 lakhs, I started crying. I cried all the time. I cried so much that my eyes are always dry now. It is my husband who is looking after everything. Even when the crop was ruined by rain, he went home – worked day and night to save what seeds he could from the corn. He is taking care of things – but it is still not enough.” - Sumitra.

It is becoming very difficult for Srinivas to keep up the treatment. Before he even gets a chance at fighting cancer – Hema's parents would have to forgo treatment. It is the darkest time for the family and they could really use a helping hand.

Your contribution can save little Hema Srinivas from cancer. 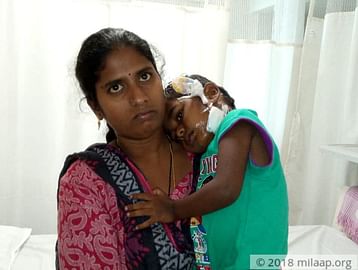 Little Hema wants to get better before he goes home

Hema's treatment has just started and his parents need help making sure it doesn't stop.