You are sending a message to
Rahul Khismatrao
Go back

Shares
Shares
Share on whatsapp
Art lovers and enthusiasts will remember the 90s renowned artist, Vinod Mangeshkar who designed the sets for films of Rajesh Khanna, Jeetendra and Mumtaz. He now lives in the slums of Pune, working as a security guard to earn his living.
Vinod Maheshkar’s small house in Pune showcases his work of art. Paintings of Mother Teresa , Dhirubhai Ambani adore his walls. His passion for painting won him appreciation from the former Prime Minister Jawaharlal Nehru for a portrait he drew of him at an young age of 4. He set a record for making the biggest painting of Lord Hanuman in just two days. But achieving so much didn't put him in a better place in old age. With his deteriorating health and skyrocketing medical bills, this artist is walking towards uncertainty.
Mangeshkar had a traumatic childhood. He lost both his parents to the Panshet floods in Pune. Orphaned at a young age, Mangeshkar’s future and his passion for art came to standstill. But life gave him a chance. His hope came in the form of Punjabi man who resided in Delhi. He adopted Mangeshkar. The next 10 year of his life made him grow into an artist that he is now. He moved to Mumbai with dreams of making more art and earn a living.
With his talent and passion, he was quick to impress the big names in the film industry. He went on to design film sets for the big stars of Hindi film industry. Vinod Mangeshkar became a known name in the industry after working with stars like  Ramesh Sippy, Rajesh Khanna, Padmini Kolhapure, Jeetendra, Mumtaz.
But as years passed by, Mangeshkar’s life took a downfall.He survives on the meagre income he earns as a security guard.
Vinod Mangeshkar suffered a heart attack a few months back which led to bypass surgery. A loan he borrowed helped him pay for the surgery. But now he is left with a loan of nearly 9 lakhs.
Few months ago, Rahul Khismatrao, a third year electronic engineering student from Pune  with a passion for art was introduced to Mangeshkar by his teacher, Bharat Janaj. After hearing Mangeshkar’s story, Rahul decided to help him.
An article in Sakal Times quoted Rahul “He had a heart attack a few months back and had to get a bypass surgery done. But even after being such a talented artist, he is left with really less money and has to still repay a loan of almost Rs 8-9 lakh”.
Mangeshkar's last wish to create an art academy for passionate youngsters who cannot afford entry into big art schools and he wants to work towards the same once he is able to settle his medical loans.
Rahul, as an effort to help the artist started a fundraising campaign. He is looking to raise over 12 lakhs which will be sufficient to settle Mangeshkar's medical expenses and loans.

How you can help
This selfless artist even his old age is looking to help artists grow. Let's support Vinod Mangeshkar live peacefully. 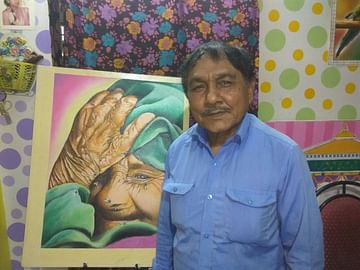 He working as a security guard to settle his medical expenses