Srinivasan Needs Your Help To Save His Failing Kidneys | Milaap
loans added to your basket
Total : 0
Pay Now

You are sending a message to
Krishnamoorthy Srinivasan
Go back

Srinivasan Needs Your Help To Save His Failing Kidneys

Shares
Shares
Share on whatsapp
Krishnamoorthy Srinivasan was forced to quit his job when he was diagnosed with 2 failing kidneys. The 52-year-old from Coimbatore is the only breadwinner in his family and has been undergoing dialysis every day. As a result of this, he has been unable to work.

"I have been undergoing dialysis for the last 20 months. It is hard. I have not worked for 20 months. It has been quite hard on us." - Krishnamoorthy Srinivasan,52

Srinivasan is from Coimbatore, TamilNadu. His wife has been a homemaker for the last 10 years. His daughter is doing her Bachelor of Arts degree in English Literature in Coimbatore. Srinivasan was the only earning member in his family.


He worked in Servo Engineering Works Private Ltd for 20 years in Coimbatore. He then shifted to Chennai as the Chief-in-charge of the production department in an engineering company for 2 years. Srinivasan was then transferred to Ahmedabad, Gujarat where he went on to work for 7 years.It was in July 2015, when he was in Kochi, Kerala on work, that Srinivasan started experiencing stomach problems.

From Kochi, he came back to Coimbatore and went straight to the hospital. After multiple tests, medicines and continuous vomiting, he was admitted. On getting blood tests and an ultrasound done, the doctors found that his keratin levels were 50 when it is supposed to be 1.3 and urea levels to be 450 when it is meant to be 50 for the average person.

"They told me that both my kidneys were damaged. And that I needed a kidney transplant soon." - Krishnamoorthy Srinivasan

Dialysis helped his keratin and urea levels to come down drastically, but a kidney transplant is the ultimate solution treatment.

Srinivasan has been undergoing dialysis thrice a day for the last 20 months. Srinivasan's wife is the donor. The transplant is scheduled for the last week of May.

"I discussed with my family members to see if anyone was willing to give me a kidney. Unfortunately, they were unable to do so. My father is 80 years old and my mother is 77. My brother and sister cannot donate either due to health issues."

Srinivasan has been unable to get a job due to his condition. He has actively applied for jobs, but has not been successful so far.

"The time that I need to go back home for dialysis is not something that employers want to hear. So it is a little hard when I need to go about this treatment with no steady income," he said.

"My wife is giving me her kidney. We have undergone all the tests, and the doctor has given us the go ahead." - Krishnamoorthy Srinivasan.

Srinivasan needs all the help that he can get to continue his treatment and support his family. Your contribution will help him.

Click here to help Srinivasan pay for his kidney transplant and go back to work!
Donate 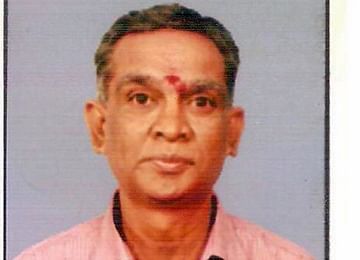 Help Srinivasan In His Fight Against Kidney Disease

Srinivasan,the sole breadwinner of his family needs your support to be treated successfully.