This father who met with an accident needs our help to stay alive for his young children | Milaap
loans added to your basket
Total : 0
Pay Now

Shares
Shares
Share on whatsapp
Richard was kind of reluctant to go on his bike that day and but he decided to go After an hour, Nancy got a call. Richard met with an accident and has been in critical care for poly trauma. Horror struck the family. Nancy didn't know what to with her two little children.

Richard had undergone two major surgeries ever since in his head to realize the pressure in his head; life-saving surgeries. Richard's a sweet family of four, two loving kids, daughter aged 9 and son aged 7.
His daughter is very attached to her dad and is finding it difficult to cope up.

Richard's son doesn’t understand the seriousness as his wife and relatived are trying to be normal in their presence. It’s been 20 days since the accident and he is still unconscious and on the ventilator. Nancy has exhausted all our savings. Richard is currently on maximum medication to control infections.
We are still not clear what caused the accident

"Earlier it was told to us by the police, that a cow was involved in the accident. My husband lost control and hit the cow and fell and hit himself on the median. But the video footage that we have collected from the near shops says otherwise. That it was a case of hit and run. We would have to investigate that too simultaneously to otherwise closed case by the police", says Nancy

The family has spent 17 lakhs until now and we will run out of financial resources by another one week. Doctors say it would take months to years for him to become normal; he would require home care even after leaving the hospital.

"I don’t want to ask anyone for anything but unfortunately my situation has changed from being a contributor to acceptor. I have planned to sell our property but it will take a long time   But until then I need financial assistance. With great pain in my heart, I want contributions to save my husband"
How you can help

Our support will ensure two little children get their father back. Funds will be utilised for Richard's rehabilitation and medications.

Click here to make a contribution and save Richard
Donate 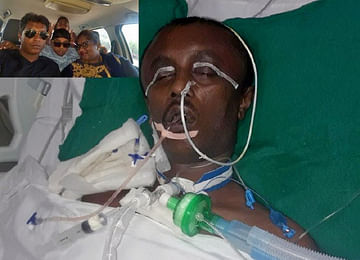 Help Richard who met with an accident

Richard needs our help to stay alive for his two kids