Durga's A Singer Whose Entire Family Is Dependent On Her And She Needs A Kidney Transplant To Live | Milaap
loans added to your basket
Total : 0
Pay Now

“I wish the only thing I had to worry about was my health. I know my family will suffer so much more if I don’t get better,”

25-year-old Durga is a singer who lives in Hyderabad, with her family. Eight months ago, she got a high fever and severe pain in the stomach. Her blood pressure also shot up. She was diagnosed with total renal failure - meaning both her kidneys had stopped functioning. She needs a kidney transplant to live.

Durga hadn't anticipated falling this sick even in her dreams

Durga studied B.Sc in Computer Science but found her true calling in music. She made a bold move and made it her career. Coming from a family of musicians, singing came naturally to her. Her father Venkata Ramana used to be a classical singer, but age and poor health left him unable to sing. He hasn’t been able to work ever since.

Durga has been surviving on dialysis sessions, one every alternate day. She falls sick often and of late, hasn’t really been in a condition to work. Moreover, the seasonal nature of her job doesn’t let her enjoy the luxury of a stable monthly income. On the side, she teaches classical music to children in Hyderabad. She understands very well the consequences of her illness, and the thought of not being able to provide for her family haunts her more than her ailment.

Durga is the financial mainstay and the backbone of her family. If she falls, their lives will crumble in no time

Durga is the only breadwinner in the family of four. Her father suffers from high BP and has severe diabetes. Her mother Leela is a homemaker who takes care of the household while Durga tries to make a living through different musical gigs in the city. Durga also has a little sister, Sangeeta, who’s studying in class 10 - whose education Durga takes care of.

Durga is currently receiving treatment at Century hospital in Hyderabad. On alternate days, she goes for her dialysis sessions, each session costing her an exorbitant amount of money, given her financial condition. In fact, the costs of her treatment are so steep that in spite of her desperate need for medical supervision, she doesn’t want to get admitted to the hospital.

“I’m lucky to have friends who came forward to help me. But in the end, how much can they do? It’s not like money grows on trees for them.”

Durga’s treatment so far has cost her up to Rs 1.3 lakhs. She had no means to afford that amount. Her friends pooled in their own money for her treatment. She also borrowed some money on credit to pay for the expenses. Managing a household and treatment with a meager earning of about Rs 5,000 a month is not a mean feat. Even in her sickness, Durga has been fighting a very brave battle on her own.

Durga is the epitome of a strong and dependable woman. Even in the time of such distress, all she worries about is her family and the perils they will have to face if she doesn’t make it. Let us give this brave woman a second chance at life by contributing towards her treatment. 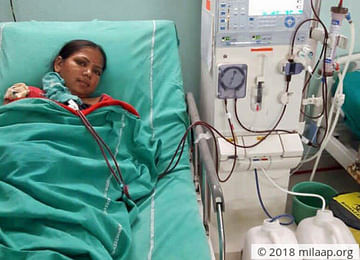 Both Durga's kidneys have failed. She can't afford to miss work because her family depends on her.