This Boy's Only Birthday Wish Is To Stay Alive, But His Father Is Struggling To Save Him From Blood Disease | Milaap
loans added to your basket
Total : 0
Pay Now

DP
You are sending a message to
Divyesh Parmar
Go back

This Boy's Only Birthday Wish Is To Stay Alive, But His Father Is Struggling To Save Him From Blood Disease

“My son has been battling with Thalassaemia since he was three months old but he has never let the ailment hold him back from any kind of activities. But now his condition is so bad that he can hardly get up from his bed. His birthday is in the month of December and he says that his only wish is to stay alive. I feel utterly helpless as I  see my son living in the constant fear of death, living in the constant fear that he might not make to his  next birthday.,” - Bipinbhai Parmar, father.

Divyesh was only three-months-old when his parents got to know that their little son has been diagnosed with Thalassemia Major. It is a blood disease that involves lower than normal production of oxygen-carrying protein. Since he was three-months-old, he has been getting blood transfusions but now the doctors have told Bipinbhai that his son’s only chance at survival is through an urgent bone marrow transplant.

“Life has almost come to a standstill for my son. His health has been worsening every day and often I catch him sitting by the window and shedding silent tears. He doesn’t say much but I can see it in his eyes that he feels sorry for himself.”

Divyesh with his mother, Geeta

Divyesh is going to turn 15 this 21st December but he is in no condition to celebrate his birthday. His older brother and his parents have been trying their best to plan something for his birthday but he seems very disinterested and distant.

“On the first week of December we have to be in the hospital for his tests and check-ups. Just thinking about going to the hospital makes him upset. So this time we thought of planning to celebrate his birthday despite the fact that we would be in hospital. But Divyesh has hardly showed any interest. He seems lost in his own thoughts and keeps on asking when he will get better.”

Bipinbhai works in a screen printing job in Rajkot, Gujarat. His work involves the printing of advertisements and greetings card and that is seasonal in nature. He earns around Rs 7000-8000 per month when he has work. His salary is not enough for his family of five people who are completely dependent on him. His son’s life-saving treatment will cost him around Rs 35 lakhs but that is a lot of money for Bipinbhai who doesn’t know how he will arrange for it without help.

14-year-old Divyesh has been fighting a blood disease since he was just 3-months-old. A braveheart, Divyesh has never let the ailment pull him down but now his health has been worsening every day and his only hope at survival is a bone marrow transplant at the earliest. Unfortunately, his family can’t afford the treatment. However, your kind contribution can help this teenager get a better life.

Your support can save this teenager's life 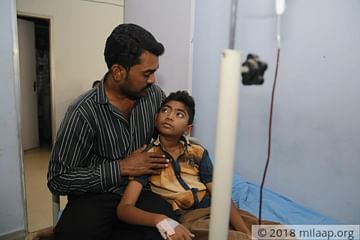 Only A Bone Marrow Transplant Can Save This Teenager's Life