Shares
Shares
Share on whatsapp
Yogivardhan is a 6-year-old patient with a blood disorder that needs him to get blood transfusions twice a month. Such regular blood transfusions create excess iron in the body and start damaging inner organs. Yogi has a few months left before this process starts. If he gets a bone-marrow transplant, he can beat this condition once and for all.

Yogi with his parents Sumitra and Prasanna

Every month, Yogi becomes so weak and dull he needs blood injected into him

Yogi started school just two years back and quickly became the naughtiest kid in his class. He as been punished for talking, sharpening his pencil too much and for colouring in his classmates' notebooks. His sharpener and colours have been taken away and his parents Sumitra and Prasanna get notes about him talking too much.

Yogi is an active, naughty boy in school

But every once in two week, Yogi loses his spark. He become dull and loses energy for anything. He doesn't go to school and even doesn't eat food. He cries to his mother that his body hurts every where. There is nothing they can do for him but take him to the hospital and inject fresh blood in his body.

Yogi is used to the needles sending blood in his hand. He has been getting this for most of his life – from when he was just a 5-month-old baby. Unlike many other children, he doesn't cry when this happens. He patiently waits out the transfusion and is back to his usual self by the next day.

Sumitra is worried about both her children fighting this condition

“He is our first child and we keep a very close eye on his condition. When it is time, he becomes pale and stops eating. We know it is time and we take him to the hospital. We found out only now that he needs a bone-marrow transplant before he turns 7 to live a healthy life. We don't know how to arrange that,” says Sumitra.

Yogi's parents have moved to Bangalore for Yogi's treatment

Yogi's family is a farming family and they lived in a small village in Chikmagalur. Once he was born, however, the family started coming regularly to Bangalore for his checkups. Eventually, they decided to move to the city so Yogi's condition could be closely monitored.

Yogi and his sister Vinodhana playing in the hospital

“We hoped that our daughter would be healthy and we could use her stem cells for Yogi's bone-marrow transplant. But my unlucky daughter was born with the same condition too. Now we need to take both of them twice a month for blood transfusions,” explains Sumitra.

Ever since both their children were found to have this condition, Sumitra and Prasanna have worry day and night thinking about their future. Yogi's father works as a driver in a private company and works long hours for some money. They live with Sumitra's brother who pays the rent for all of them.

Yogi loves playing, studying and going to school. He needs a bone-marrow transplant to continue to be a happy child

But no matter how hard Prasanna works, he cannot save enough to get his son treatment that can make him better. As it is, they spent close to Rs 5,000 a month on the children's checkups. A bone-marrow transplant for Yogi will cost Rs 34 lakhs. 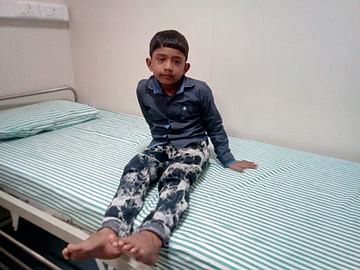 Yogi needs blood transfusions twice a month. He needs a bone-marrow transplant to get better.