This Uber Eats Delivery Executive Is Running Out Of Time To Save Son Who Needs Food Pipe Reconstructed | Milaap
loans added to your basket
Total : 0
Pay Now

“He’s stuck within the four walls, 7 days a week; His world is restricted to just our house and the hospital! He should be playing outside, or running around in the park like other kids his age. But no, he can’t. Because, if he catches an infection, it will then be a question of life or death for him.”– Rajesh, father.

Little Yogesh needs an urgent surgery, but Rajesh, a delivery executive, doesn't have the means to afford it.

Little Yogesh has severe breathing issues, he can’t breathe on his own. For that reason, he had to undergo tracheostomy – through a cut in his throat, a tube pinned to a hole in his windpipe helps him breathe. Now, he requires extensive attention and care since he’s prone to infections. If there’s phlegm at any point in time,  the tube has to be changed instantly. If left unnoticed even for a short time, it will be fatal for Yogesh due to clogging and breathlessness.

Even when he gets hurt, he’s afraid to cry

“In the beginning, soon after his surgery, he was very scared. He attempted to pull away the tubes but they hurt. So, he has stopped trying. It hurts to see him trying to get used to a life like this, where he’s deprived of everything the other kids do. He can’t bathe or play in the water. He can’t even cry. It’s a struggle every time the tube needs to be changed. Can’t blame him. He’s only a toddler still!” – Vasuki broke down.

"There are ants inside my neck. They keep biting me always. I don’t like them.” – Yogesh.

Yogesh had just begun talking and it was a joyous period for all. However, it did not last for long. He was admitted to the hospital for a severe case of pneumonia, soon after. After 2 months in the hospital and 20 days in the ICU, he was discharged. But his condition only went downhill since then. He could hardly breathe. He was rushed to the hospital again, where he was advised to undergo a tracheostomy. The parents were informed that there were chances of him never being able to talk again, after the surgery. Luckily for him, he did not lose his speech. But life was never the same.


He went to pre-school for only 2 days

“He is not allowed the joy of playing with kids – they might pull out the tube. He craves to just step out so much that, if left alone, he heads straight for the door. We can’t even have guests visit us, that’s how sensitive his condition is. He’s really smart. He has learnt the numbers, colours and alphabets all by himself, by just seeing videos. That’s all he does all day! He amazes us. I feel miserable thinking we might have to deny him his school life, because of his condition! This surgery is his only hope for a normal life.” – Rajesh, father.

Having exhausted all sources of money, these parents are struggling

Rajesh works as a food delivery boy for an income of Rs. 10,000 a month. Being the sole earning member of a family of 5, his journey since last year has been a financially difficult one. With the help of friends and relatives, Rajesh and Vasuki managed the expenses so far. Now, they’ve hit the dead-end and have no other source of money left. The operation will cost 4,30,000 and they are in desperate need of funds.


“Most of I get goes for the rent, there isn’t much left usually. Now, over the past few months, it has been worse. I haven’t been able to work as much.  I don’t know where to get the money from! Vasuki and I spend every minute of our day fearing the worst. We are scared to sleep. What if he coughs then and we don’t notice? It is frightening! He has already suffered enough for a lifetime! I want to make it stop, but I’m helpless. Any contribution from you will help us immensely."

Yogesh is being deprived of his childhood due to his condition. Your contribution can help save him and give him the life he deserves. 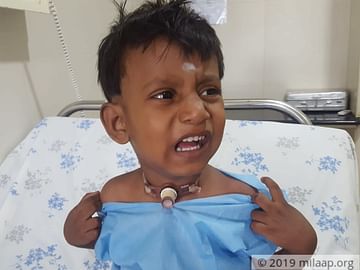 Even When He Gets Hurt, He’s Afraid To Cry

Little Yogesh needs an urgent surgery. It's his only hope.

UPI: givetorajeshfund1@yesbankltd (Copy to clipboard)
Or
Click here to read the instructions before you make a bank transfer.