This son sold his taxi to fund his father's heart surgery but it is still not enough | Milaap
loans added to your basket
Total : 0
Pay Now

Shares
Shares
Share on whatsapp
My name is Omesh Mane, son to 62-year-old Vilas Mane. My father has bee driving taxi throughout his life, in a bid to give his family a life better than he could ever be exposed to. By and large, he succeeded in fulfilling his fatherly responsibilities, but same cannot be said for his sons, who are struggling to fulfil their duties towards their father.

My father has been complaining of chest pains for a few months now. We took him to Dr Hamdulay who, after conducting an angiography, recommended a bypass. We were expected to admit him for bypass by October 9, 2017 but my father had a severe heart attack two days before and had to be rushed to Global hospital as an emergency case.

As if things weren't already bad, upon reaching the hospital, my father was also diagnosed with kidney failure as well. His kidney shows 80% damage and doctors at Global Hospital say that if we immediately don't find means to get my father on dialysis, his entire kidney functionalities will give up. We are still scouring for the hospital where we can have him undergo dialysis at the cheapest cost. At present, a bypass is on hold.

"I feel like I've failed my father as his eldest child"

My father has suffered enough. In an age when he should be all done with his responsibilities and remain at peace and leisure, he is fighting a lone battle to stay alive. As his son, it is my responsibility to make sure that my parents are living a life of comfort, however minimal it is. But as it stands out, I am not even able to do that due to lack of money. I am just standing mannequin to my father's pain and it breaks me to know that I might lose him just because I am poor.

My father had to leave driving taxi due to a heart condition and now we are struggling to make ends meet. In today's time,  Rs 6,000 is not even enough to take care of one person let alone eight, out of which one requires urgent and expensive medical attention. We are worried about the prospects of future. We don't want to lose our father!

Vilas is 62-year-old and had to leave his job because of his condition. Now he is struggling to make ends meet. His eldest son has managed to raise Rs 1 lakh by selling off the taxi that kept the family fed, but they still need to arrange for Rs 2.5 lakhs. Funds raised through this fundraiser will go towards his dialysis and surgery. 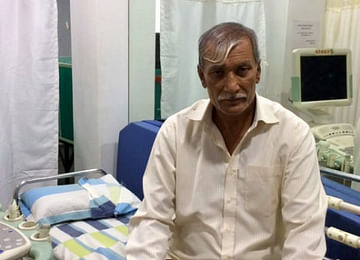 Vilas' sons are struggling to arrange for funds to save their father.