Alcoholic Husband Left This Wife Alone In A Fight To Save Their 9-Year-Old Son From Blood Cancer | Milaap
loans added to your basket
Total : 0
Pay Now

You are sending a message to
Akshata
Go back

“His joints were swollen so much that I couldn’t even touch him without causing him pain. His whole body trembles because of fever and sometimes his nose bleeds. He has cancer and instead of being there for him, my husband asked me not to call him anymore and said he didn’t care what happened to our son.”

As Vikas lay on the bed, a loud, angry voice disrupted the silence of the hospital. Vikas recognized that voice too well and his eyes welled up with tears. His father had finally come to visit him for the first time, but he was drunk. He stood by Vikas’ bedside, yelling and cursing. Vikas began crying while Jayashri held him till the voice faded away. Vikas not only has to deal with the physical pain of cancer, but also the mental trauma of his alcoholic father. Jayashri’s faith is now crumbling. With no emotional or financial support from her husband, she has nothing left to save her 9-year-old son from cancer.

She couldn’t even afford to start his cancer treatment

Vikas was diagnosed with blood cancer in February this year after he complained of severe body pain and had a high fever. Jayashri soon learned that her youngest son has blood cancer.

“When the doctor told me he had cancer, I had only Rs. 4000 as savings, but I needed lakhs for his treatment. I didn’t know how I was even going to start it. The hospital helped us start treatment, and I managed to borrow some money. But it’s not enough to complete his treatment. I will lose my son if I can’t afford chemotherapy.”

Vikas has completed two cycles of chemotherapy so far but needs to continue treatment for longer to get healthy again. His only chance to make it is to complete the course of his treatment.

“It’s been 10 years now and I’ve brought up my sons on my own. My husband comes to see us once in a few months, but he always comes home drunk. Vikas is so scared of him that he hides all his toys because my husband starts throwing things around the house and breaks all his toys. It hasn’t been easy. He can get extremely violent and we’ve all been through a lot, but I’ve tried to protect my children as much as possible. We’ve made it through my husband’s wrath so far, I wish there was some way for me to save him from the wrath of cancer as well.”

Jayashri worked as a teacher in a small school in their village, Tadakal. She earned Rs. 3000 per month and somehow managed to keep her family going. However, after Vikas’ diagnosis, Jayashri had no option but to quit her job. With an absent father and no other income, Jayashri has been carrying the financial burden of his treatment all on her own. Unfortunately, as desperate as she is to save her son, she just doesn’t have the means to continue his treatment any longer.

Vikas has completed two cycles of chemotherapy so far, but his fight isn’t over. He’s only 9-years-old and blood cancer is making him weaker by the day. He needs to continue treatment for another 2 years to beat cancer, but Jayashri has nothing left to save him. She will be forced to stop treatment without funds, and might her lose her son forever. She needs your help to save his life.

Your support will save Vikas’ life. 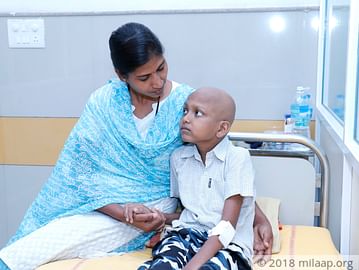 Vikas needs chemotherapy to survive but his mother has nothing left to save him.