This Heart Patient Is A Young Mother Who Needs Our Help To Stay Alive For Her Babies | Milaap
loans added to your basket
Total : 0
Pay Now

You are sending a message to
Ramesh
Go back

Shares
Shares
Share on whatsapp
Since the birth of her first child, Vidya Pallavi has been sick and been suffering from different illness. After the birth of her second child, she developed childbirth related heart disease. Her heart is failing and she needs an urgent heart transplant to live. Her husband Srikant works for a private bank and needs help saving the mother of his 2 children.

Her illness has broken up this previously happy family. Vidya needs to take complete bedrest. She lives with her parents in Tanuku while Srikant works in Vijaywada. Srikant works has long work hours which means their two daughters Sharanya (7) and Dhatri (2) have to live with their paternal grandparents in Rajahmundry.
Vidya and Srikant at the hospital
The elder one Sharanya has started school and Srikant is able to talk to her and explain why she needs to be strong. But the younger one, Dhatri is too young to understand. She has not taken well to being separated from her mother and is acting out.

“Dhatri has become an angry child. She needs constant attention and if we don't look at her, she throws things. She cries in the night, not sleeping till 3 a.m. She has also started biting the grown-ups to show her anger. Both of them really need parental attention, but that is not an option right now,” Srikant explains.

He has applied for a transfer to Rajahmundry and hopes to restore some sense of normalcy in the girls' lives. “Vidya is the one who is suffering the most. For her, I remind myself I need to be strong and take care of work, the girls and her. Once she gets better, we will all be together,” he says.
Vidya with her husband and two daughters Sharanya and Dhatri

Vidya's health is getting worse everyday

Vidya is a MBA graduate with a lot of dreams. But her career came to stop when she found out that she was pregnant. Her first daughter Sharanya was born in 2010, but her delight with motherhood was marred with a bad an attack of tuberculosis. She took treatment for TB but soon needed a spinal surgery as well.
Vidya with her father at the hospital

I miss carrying them in my arms. I would do anything to be with them now

Five years later, she had her second daughter but by this time, her body was weak and her heart muscles gave out. Since then, she has been living with heart disease growing weaker every day. She suffers from breathlessness, weakness and potassium deficiency that makes her body ache painfully.
In this state, what pains her most not being with her children who are too young to adjust to what is happening. “Sometimes she tells me she doesn't want treatment because it is very expensive and I should just let her go. But then she thinks of our children and knows that she has to get better for them. They need their mother,” Srikant explains.
Vidya is too weak to do anything but take bedrest. She is waiting to go back to her family.

Srikant works in a bank and earns enough to take good care of his family. But the constant medical expenses have taken their toll and depleted all his savings. Vidya's health is more important than any money, but Srikant fears he is reaching a point where there is no money left.
He has already borrowed Rs 2 lakhs for Vidya's treatment at a high interest. For Vidya's heart transplant, he needs 27 lakhs. There is no way he will be able to arrange an amount that big. He needs help saving Vidya who is so important for everyone in the family.
Your contribution will help Srikant save Vidya from heart failure.

The specifics of this case have been verified by the medical team at the concerned hospital. For any clarification on the treatment or associated costs, contact the campaign organizer or the medical team.
Click here to save Vidya.
Donate 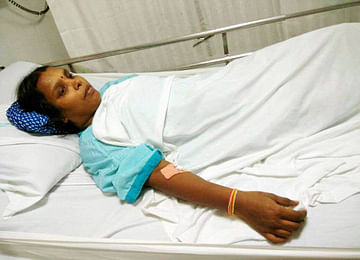