Single mother has to neglect her own health for her 14-year-old suffering from the same deadly illness | Milaap
loans added to your basket
Total : 0
Pay Now

Shares
Shares
Share on whatsapp
Venkata is a 14-year-old with a severe liver disease. It is the same condition that his mother suffers from. Luckily, with treatment, Venkata can get better and live a normal life. But the treatment is expensive. Venkata's father is no more and his mother Swapna sacrifices her own health to make sure Venkata gets treatment.

Venkata is his cousin's role model

After losing his father 5 years back, Venkata's whole world is centered around his mother. He is more understanding than 14-year-olds usually are. He makes sure his mother doesn't ever overwork herself or is saddened by his behavior. He is shown as a role model for all his younger cousins.

But Venkata's life is changing for the worse. Two years back, he developed an auto-immune condition called systemic lupus erythematosus (SLE). In this condition – the immune system attacks the body's healthy tissues, affecting all major organs. Venkata's condition is slowly getting worse.

Venkata with his grandparents

The disease has affected Venkata's liver and kidneys and the condition is only getting more aggressive with time. He has been hospitalized thrice in the last four months – each time his condition more critical than before. His mother has managed the expenses by borrowing from Venkata's grandparents.

His mother does some admin work in a small company in Hyderabad. On Venkata's medicines alone, she has to spend more than her salary. For herself, she only takes medicines. She visits the doctor only when her condition becomes really bad. She has to live because she has to care for Venkata.

Venkata asks his mother if their family is cursed

Swapna was the one who fell sick first in 2008, when Venkata was just 5-years-old. From then, things only went downhill for the family. As Swapna battled SLE, her husband developed cancer. He died within 8 months of diagnosis leaving behind a young wife and child.

Swapna was heartbroken but slowly put her life back together for Venkata's sake. She got a job and started staying with her parents. Her father helped her financially and emotionally through this time. Unfortunately, 2 years back, he too passed away and Swapna feels like she is fighting a losing battle.


Venkata's paternal grandfather, who also helps them financially is bedridden with kidney disease. As Venkata's condition gets worse, Swapna feels like she has no one that she can turn to. Venkata, who is old enough to see what his mother is going through has started to feel like his family is cursed.

Even with a monthly income of only Rs 8,000, Swapna has managed to arrange for over Rs 10 lakhs for Venkata's treatment till now. Venkata needs injections worth over 50,000 to handle his condition over the next few months. Swapna is in no condition to purchase this life-saving drug for Venkata.

Swapna has lost many loved ones in her life. Despite that, she is still doing everything that she can do for herself and her child. She has borrowed heavily for her son's hospitalization and now needs support. Contribute to help this brave single mother save her son with timely treatment. 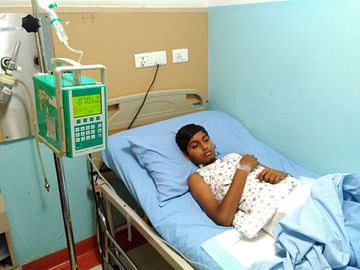 Venkata's body attacks its own organs. He needs expensive medicines for the condition.

UPI: givetokalvala@yesbankltd (Copy to clipboard)
Or
Click here to read the instructions before you make a bank transfer.