After Waiting 9 Years To Conceive, This Mother Can See Her Babies Only For 15 Minutes/Week In The ICU | Milaap
loans added to your basket
Total : 0
Pay Now

After Waiting 9 Years To Conceive, This Mother Can See Her Babies Only For 15 Minutes/Week In The ICU

“I was so eager to meet my babies. Maybe too eager. When the doctor said they needed to be delivered at 29 weeks, I was actually excited that I would get to see them so soon. I never understood the meaning of premature. It took 2 mins to deliver them. I waited to see them, and instead saw the nurses rushing the babies out of the OT. Hours I waited. My mind was screaming asking if the babies were alive when Feroz came and told me that they are in the ICU. It has been a few weeks. And I get to see them only for 15 minutes every Sunday." – Yasmeen, Mother

Yasmeen and Feroz have been married for 9 years. They always felt like their family was incomplete. People commented about the couple being childless behind their backs, at family gatherings, and often advised the couple to seek help. Yasmeen loves children, and used to take care of the kids in the family. They never thought IVF would be their only option to conceive.

"In that moment, you become so desperate that you are willing to do anything. We never thought that the cycles would fail so many times. We never expected this to drain our savings so much that we had to sell Yasmeen's wedding jewellery. All that we could think of was holding a baby in our arms. I cannot explain how overwhelmed we were when finally Yasmeen conceived, and discovered we were having twins! It felt like Allah blessed us." - Feroz

When Feroz took Yasmeen for ultrasound tests on 5th March, the doctor asked him to immediately admit her. There was a risk of preterm labor. She needed to be observed and monitored constantly. They wanted to keep the babies in her for as long as possible.

“I did as I was advised. On the night of 6th March, Yasmeen started vomiting. She had stomach pain and very high blood pressure. We had no choice but to go forward with the delivery. I did not know the consequences. At 29 weeks, their lungs are so underdeveloped. They need the ventilator to breathe. It is a miracle that they are alive.”  - Feroz

'She hopes that her smile can give them strength'

The twins have been in the NICU ever since birth. They have low birth weight, jaundice, and respiratory distress. They have not had their mother's milk yet, and are on IV Fluids. Yasmeen is too weak to travel and see them every day. So she visits on Sundays. She believes that if she is positive around the babies, it would help them recover.

'We put everything into having these babies, there is nothing left to save them'

“I work as an office boy in a private company in Vashi and make about Rs 10,000 if I work overtime. I haven’t been able to go to work since the 7th of this month. On top of this my debts are piling up. My friends have been very kind and have helped me. With their help, I have already paid about 2.4 lakhs but there’s no way I can arrange for 12.6 lakhs for my twins.” - Feroz

Feroz’s day starts early in the morning when he runs around in the city of Mumbai, approaching every trust or NGO to help him pay the hospital bills. He has paid a small part of the bills and there is still a lot overdue. With your help, this struggling father can bring his twins back home to the mother who has been pining for them.

They have struggled a lot for 9 years to have a baby, now they are so poor that they can't save their newborns. They are looking to you for help 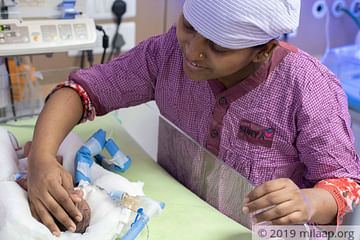 I Am Already Under Debt, Without Help I Can't Save My Twins