Sleepless Nights And Hungry Stomachs, These First Time Parents Will Do Anything To Save Their Twins | Milaap
loans added to your basket
Total : 0
Pay Now

Sleepless Nights And Hungry Stomachs, These First Time Parents Will Do Anything To Save Their Twins

“Have you ever held a newborn? They fit right into your arms, barely the size of it. I had twins 25 days ago, but I haven’t held them for more than a few seconds. They were taken away from me almost as soon as I touched their fingers. Now they’re separated from me and each other. Both fighting their own battle of survival.” – This is the first time Radha has been able to talk about her twins without breaking down.

25 days since Radha and Srinivasa’s happiest day turned tragic. 25 days since this mother has stepped foot outside the hospital. Her life begins and ends in the NICU where her twin babies lie. A girl and a boy, both fighting for their lives.

Srinivasa now spends his days in the hospital and his nights working in a private company. He works for over 12 hours, and still feels like he’s failing as a father. Nothing he does seems to be enough for his babies who need to stay in the NICU for a few more weeks to get better.

“You never forget the moment you become a parent, it was supposed to be a celebration…but for us, after 6 long years, it was anything but that. Seconds after they were born I was told that their lives were in danger, both of them! I didn’t have the heart to tell Radha..” - Srinivasa

They were born before their time

Radha found out soon enough that her babies were in danger. Her babies were born in the 6th month of her pregnancy. The earlier scans revealed nothing.

“Our babies are very weak. They tried feeding them through a tube, but they couldn’t digest it. There was blood in their diapers...”

They’re underweight and they can’t breathe without the ventilator support. While the baby girl is slowly improving, their baby boy is still critical. Both, however, need to stay in the NICU longer – it’s the only way they will survive. Radha and Srinivasa have spent over 7 lakhs on the twins' treatment so far. The daily medical bills are more than Srinivasa earns in a month. He has no way to continue his babies' treatment.

Radha and Srinivasa want to take both their babies home. You can help make their dream of having a family come true. 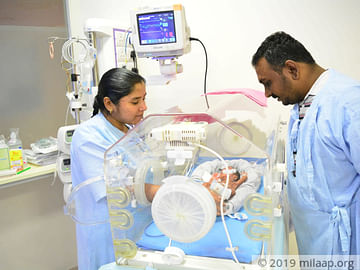 Their One Chance Of Surviving Is With Your Support

Radha and Srinivasa need your help to save their twins who are in the NICU.