Sparsha Always Prayed For A Sister, But Now She Might Lose Her To Cancer In A Day | Milaap
loans added to your basket
Total : 0
Pay Now

Sparsha Always Prayed For A Sister, But Now She Might Lose Her To Cancer In A Day

“We had always agreed on one child after the wedding, and after our elder daughter, Sparsha was born, we were content. It was soon after that when we started having a tough time understanding her behavior. She would usually stay aloof, stop eating or speaking and would spend her day at home crying behind the curtain and often hear her praying and asking for forgiveness. She was always under the impression that she has done a mistake to not have a sibling, after comparing herself to the kids in the village. We were devastated seeing her like that” - Pramodam, mother

It was like the little one's prayers were heard, and the parents rejoiced in the happiness of another child - Tashvi. Unfortunately, their joy was shortlived when little Tashvi was diagnosed with liver cancer.

A wave of happiness spread across when Tashvi was born, she pleased everyone’s heart. But Tashvi’s sudden episodes of indigestion, followed by vomiting and high fever and constant drop in weight was alarming. The case was diagnosed as indigestion and she was prescribed antibiotics for a week, which led to 4 continuous weeks of medication. When there was no change in Tashvi’s health after the fourth week, they urged the doctors to conduct further tests to confirm why none of the medicines had worked. Blood tests and a CT scan later, a cancerous tumour in her liver was found.

“We had been frantically running to hospitals. Suggestions led us to Bombay. The treatment started with chemo when midway, we were told there would be no further sessions required and that the surgery would suffice. We were happy, we thought with surgery, she could go home soon. The chemo had made her so weak, she was in pain all the time. Her smile? it had vanished. But almost immediately we were told that her tumor had grown and surgery would not help. Now, she needs a liver transplant. Tomorrow.”  - Sukumar, Father of Tashvi

Tashvi’s parents travel every day from Kalyan for her treatment. As if this wasn't enough, Tashvi’s father lost their only support from the family to a heart attack. The entire family from Bombay went back, but they couldn’t attend the funeral. Tashvi’s sister waits, every day, and is regularly seen praying for her to finally come home.

They have exhausted all modes of collecting money, and now they see only darkness at the end of the tunnel. Being a waiter at a hotel, Sukumar earned a meager salary to run the family, and had to leave his job to take care of his daughter. Now, he needs you to help Tashvi to survive. 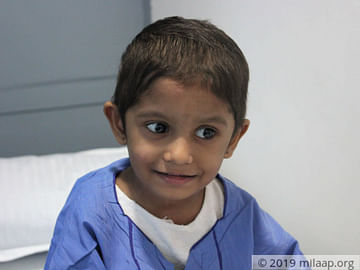 This 3-Year-Old Needs A Liver Transplant Tomorrow To Survive

Tashvi needs your help to fight the cancerous tumour in her liver.