A Salary Of 8000 INR Decides This 8-Month-Old's Survival. Your Support Can Change It. | Milaap
loans added to your basket
Total : 0
Pay Now

A Salary Of 8000 INR Decides This 8-Month-Old's Survival. Your Support Can Change It.

Shares
Shares
Share on whatsapp
8-month-old Sushanth cannot express how much he is hurting, so he just cries in pain. His parents helplessly make efforts to distract him, or to somehow make him smile, but the pain is intolerable.

"He is just a baby. To think that he cannot even urinate without it hurting him so bad, makes me feel helpless. I am his father. I am supposed to protect him from everything in this world, but here I am, totally helpless, watching my baby boy suffer before my eyes," Sushanth's father Manoj laments.

Manoj with Baby Sushanth at the hospital

Sushanth's eyes were yellow, but they never guessed what that could mean:

Due to their inter-caste marriage, Manoj and Priyadarshini do not have the support of their families, but they were as excited as any new parents would be. Their first child promised to fill their lives with the warmth and love of a complete family. Since the very start Sushanth's eyes were slightly yellow, but the poor couple had never imagined what this could mean.

"We did notice it, especially when it became more prominent, but everyone said that this was all right. Since this is our first baby, we did not really know the right things to do. We live in a very small village, and do not have big hospitals and doctors there. A local doctor also told us this was nothing to worry about. In his third month, when we took him to a bigger hospital, we were first told there was something serious to worry about."

A Futile Surgery And The Consequences:

In December 2016, in his third month, baby Sushanth underwent a surgery of the gall bladder. Manoj and his wife did not know enough to harbour doubts. So, they held on to their hopes instead, and prayed their baby would recover completely. They followed every instruction given, and struggled to ensure they could continue the medication post surgery as well. 20 days later, their little one was still crying of unbearable pain that they could do little to ease.

"I work as a security guard and earn around Rs. 8,000 a month. Yet, in desperate attempts to save my baby, I have already spent over a lakh. I don't have a family to turn to. My parents are no more. It's just my friends who have been helping me as much as they can, but even their means, like mine are limited, " Manoj weeps at his helplessness.
"A person who earns as much as me cannot dream of a city like Bangalore, but now, I don't have an option. Only we know how we are surviving here."

Baby Sushanth with his mother

Manoj has been found to be the perfect match for a transplant, but he cannot afford the surgery.

"Not just my liver, I would give my baby my life; if only I had the means to save him," Manoj would give anything to save his 8-month-old baby's life.

Manoj wants nothing as much as to save his first-born. You can save baby Sushanth's life.

Baby Sushanth with his parents 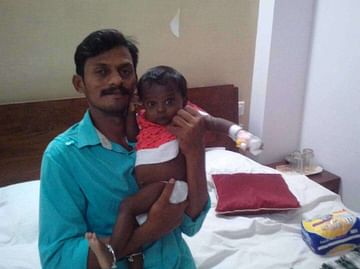 Manoj is the perfect match for a transplant to save his baby, but he cannot afford the surgery.