This Teenager Wakes Up Scared Every Night Fearing That He May Die Soon | Milaap
loans added to your basket
Total : 0
Pay Now

Shares
Shares
Share on whatsapp
Suresh wakes up scared at night. He is bleeding from his gums again. He looks around, searches for his mother and not being able to find anyone, he starts sobbing. The 16-year-old doesn’t know that a dangerous blood disease is killing him. But the teenager knows that something is wrong with him, he knows that his parents are hiding something. He fears that he hasn’t got much time in his hand.

But Suresh has hope…he can get better with treatment

Suresh is suffering from Aplastic Anemia - his body has stopped has producing enough blood cells. He needs regular blood transfusions, he turns pale if he doesn’t get on them. He becomes so weak that he isn’t able to get up from the bed. A crippling pain grips his body…


“I try to be strong in front of him. But I fail every time - miserably. He catches me crying and gets sad. The worst feeling is that I know he can be cured with treatment but we are too poor to afford that,” - Usha Rani, mother.

I have always wanted to give them a good life, look at me now - I can’t even save my dying son

Ram Chandra is a small time farmer in a village in Odisha. He earns just about enough to feed his family. But he never wanted the same life for his children. He always had big dreams for them, especially Suresh.

“He is a bright boy, I wanted him to study hard and get a job in the city. I knew Suresh can do that but now...will it be possible? I have nothing with which I can afford his life-saving treatment...” - Ram Chandra, father.

Suresh needs immunotherapy that is going to prepare his body for further treatment that he requires. But his family is in no position to arrange for the 10 lakhs needed to save Suresh.


There is no one who can lend such a huge amount to this poor family of farmers. You’re their only hope.
Donate 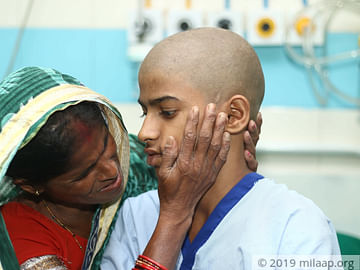 Suresh's Farmer Father Is Struggling Hard To Save Him

16-year-old with blood disease needs urgent treatment, you can help him get that