This Mother Is Single-Handedly Trying To Save Her 16-Year-Old Son From Blood Cancer | Milaap
loans added to your basket
Total : 0
Pay Now

“My husband asked me not to get him treated. He said it was a waste of time and money because he thinks cancer is not curable. There were a lot of people bringing us down and telling us he won’t get better, but I know he can beat the disease. He has his entire life ahead of him, and I’m going to stand by him no matter what," says Jaishree, Sudarshan's mother.

Sudarshan has been bravely fighting blood cancer for 6 months now. Despite several obstacles, his mother, Jaishree, took him from Bijapur to Bangalore for his treatment. Sudarshan’s only chance of a healthy future is chemotherapy. He has completed 4 cycles, and needs 2 more. If his treatment is left incomplete, Sudarshan’s fight till now will be in vain.

His father abandoned the family

It’s been 3 years since Sudarshan has seen his father. Instead of worrying for his son's life after the news of his cancer, his father was among the first to tell Jaishree not to get him treated. However, Jaishree is not one to give up. Ever since her husband abandoned her and her four children, she has been their strongest support system. Sudarshan’s diagnosis shook her faith, but not for long.

“I was so scared when they told me he had cancer, but worrying would not do him any good. I had to be proactive. I’m the only one he has, and I will never give up on him no matter what anyone else says. My husband hasn’t even called Sudarshan after finding out about his cancer. He’s in so much pain already, I don’t want him to ever think he’s alone because his father is not around.”

Even with Jaishree’s unrelenting support, Sudarshan’s journey hasn’t been easy. He had only just come to terms with his father’s abandonment when he found out he has cancer. Nevertheless, Sudarshan has found a way to stay strong.

Sudarshan joined college to study science with the hope of becoming a doctor one day. However, he was in college for only a month before he was forced to drop out. He was taken to the doctor after he complained of severe joint pain. His teachers had also noticed that he was unable to even sit upright, and would often be sleeping at his desk. Sudarshan’s skin suddenly had white patches all over and his lower lip was swollen. He had several blood tests before he was diagnosed with blood cancer.


“My husband left us because I wanted our children to study and get a job, and he wanted them to work on the farm. He didn’t see the point of an education, but I know how important it is. Sudarshan wants to be a doctor. He’s always told me how he wants to help people and save lives. He’s such a kindhearted boy. He’s still determined to fulfill his dream, it’s the only thing making him fight harder.”

With medication, chemotherapy and the unwavering support of his mother, Sudarshan’s condition is gradually improving. However, he still needs 2 more cycles of chemotherapy before he can begin to recover.

His mother was forced to quit her job, and now they have no means to pay for his treatment

Jaishree had started a travel booking company to support her family after her husband left. She earned Rs. 5,000 a month, but was forced to stop work to care for Sudarshan. With the help of her parents, she has spent Rs. 6 lakhs on his treatment already. However, Jaishree is at a dead end now.

“My son needs to complete his treatment to get better, and I don't know what to do because I’ve exhausted all my savings. My parents help us as much as they can, but here’s only so much they can do. I don't want to let him down now.”

Jaishree can’t afford to pay for the rest of Sudarshan’s treatment. She has been extremely independent so far, but now needs a helping hand to give her son the treatment he deserves. Sudarshan needs 10 lakhs for chemotherapy and supportive care.

Sudarshan has blood cancer and needs chemotherapy to get better. He was abandoned by his father 3 years ago, who was the only earning member of the family. His mother, Jaishree, has been his pillar of support so far, but can’t afford to pay for his treatment any longer. He needs 10 lakhs to complete all his chemotherapy cycles and get supportive care.

Your support can save Sudarshan and give him a chance at a bright future. 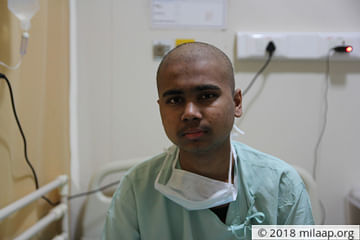 Sudarshan needs chemotherapy to beat cancer. Your support will help him get the treatment he needs.