He Can’t Take A Single Bite Of Food Without Being In Pain, Cancer Will Starve And Kill Him | Milaap
loans added to your basket
Total : 0
Pay Now

He Can’t Take A Single Bite Of Food Without Being In Pain, Cancer Will Starve And Kill Him

Shares
Shares
Share on whatsapp
5-year-old Sidharth refuses to eat. But it is not because he’s being cranky, it has nothing to do with the tantrums children throw. Sidharth is very sick. He has cancer, and even if his mother force-feeds him, he doesn’t eat anything. The pain is unbearable for him, he has even fallen unconscious due to the pain.

“It has been days since he’s even had a bite of food. They had to put tubes in his nose to feed him because he would faint because of weakness," - Reena Devi, mother.

Little Sidharth hates the hospital environment. He hates wearing the patient uniform, the smell of medicines and is very fearful of the injections he gets on a daily basis. He wants to go home, and his mother assures him that they can go soon but the truth is that he is suffering from a severe form of blood cancer. She worries that he will not survive for long because their family’s financial condition will not let them continue his treatment.

Sidharth was a healthy child who had just started going to playschool this year. His ordeal started last April with a seemingly harmless cough. But when cough syrups and medicines refused to cure him, his parents took him to Kolkata for better consultation. That is when he was diagnosed with cancer. Shortly after, he got high fever and his face puffed up like a balloon, causing severe breathing difficulty. He has been admitted in the hospital ever since and though the swelling has subsided, he is in a very critical condition.

“He is bedridden now. Sometimes when he is in a good mood, he plays with his favorite toys – a ball and a car. But just 5 minutes later, he becomes weak and lies down. When he asks me, ‘Will I be ok soon?’ I say yes, hiding my tears,”-Reena Devi

Sidharth’s father Mukesh works as a waiter in a hotel in their small village in West Bengal. He is the sole breadwinner of the family. His monthly income of less than Rs 6,000 is hardly enough to meet all their needs along with household responsibilities. Ever since Sidharth became sick, Mukesh has not been able to take even one day’s leave without risking to lose his job. So, it is left to Reena Devi to take care of Sidharth on her own. She is not educated and does not understand much regarding medicine names or treatment procedures, but she is ready to go through any struggle for the sake of her son.

“Sidharth’s father is very upset that he can’t be with us in this difficult period. But what can we do? Poor people have to make sacrifices. After borrowing from everybody we know, we were able to get him treated till now. We have nothing left now. Please help us save our son,”-Reena Devi

With your kind contribution, these parents can save their son and give him a new lease of life 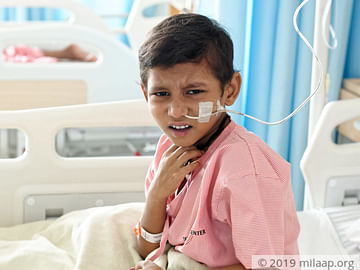