With Barely Anything In Their Pockets These Parents Struggle To Save Their Daughter From Cancer | Milaap
loans added to your basket
Total : 0
Pay Now

Shares
Shares
Share on whatsapp
It all started in the month of November last year when Shravani was playing with her two siblings in the house. She complained that her foot was aching. Radhika, the mother thought it was just a cramp and it will be fine in the morning, but the pain did not subside.

Shravani had 3-4 such episode of severe pain in the next 3 months. Every time they visited a doctor, the symptoms were not considered dangerous and Shravani was sent home with some ointments and injections prescribed.

In April, Shravani started to have pain in different parts of her body on a daily basis. Her parents knew something was wrong. They took her to the doctors and the tests revealed she had Ewing's sarcoma - a form of bone cancer.

We were at a relative’s marriage and Shravani was playing and laughing with her cousins,and then the hospital called - Radhika

They were shocked and heartbroken, they didn't know what to say or do, all they could think was they might lose their daughter to cancer.

The lie they told to the kids

The parents are scared to tell Shravani as it will only add to her pain. They told her that she has a small clot in her body which needs to be removed after which she would be fine.  She is very close to her two small siblings and takes very good care of them. Since she is in the hospital, none of the siblings have met her or talked to her for months and when they ask about their sister, they are told that she has a small injury and will come home after getting better.

Shravani is a super active girl who loves to dance and is a foodie. But now she has stopped eating completely and has lost almost 15 kgs. She is so weak that she can’t even talk without being in pain.

She is in a lot of pain and can’t stop crying. She can’t even get out of bed, she was so active before all of this happened - Radhika

Raghavendra works as a labour at a mechanic shop while Radhika works as a tailor.  All their earnings are spent on the rent, food and their childrens’ education. Shravani has completed her 9th grade and can’t go to school due to her condition. The entire family is facing financial problems and they are not able to manage even the daily expenses.

They desperately need help to save Sharavani from this painful disease and with your help it is possible. 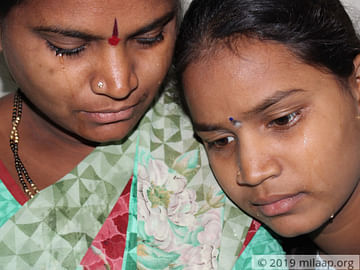 Shravani Needs Chemotheraphy At The Earliest,You Can Help

Shravani has bone cancer and without a chemo she might die due to pain.

UPI: givetoraghavendrafunds1@yesbankltd (Copy to clipboard)
Or
Click here to read the instructions before you make a bank transfer.