This 4-Year-Old Will Never Be Able To Hear And Speak Without An Urgent Surgery | Milaap
loans added to your basket
Total : 0
Pay Now

Shares
Shares
Share on whatsapp
You will always find Sathya busy playing, writing the alphabets he learnt in school or colouring. He is active and smiles every time someone waves at him. One look at Sathya and you think he’s like every other 4-year-old, but look closer and you’ll see the two hearing aids in his ear. Sathya is completely deaf in both his ears and can’t talk, as a result. While he looks ‘normal’, his life is far from it.

“He was completely fine till he was a little over 1. He had started saying ‘amma’ and he would tell us what noises the bus or the birds outside made. Our home was filled with his giggles and babbling,” – Vedavyas, father

Unfortunately, Sathya got a fever when he was 1.3 years that didn’t subside. They took him to a doctor in Shimoga who suggested a high dosage of medicines. Vedavyas and Asha took him home  - but a few days later, they noticed their son wasn’t the same. He stopped responding to them when they called his name. This time they took him to a doctor in Manipal only to find out that their son is completely deaf.

His mother can’t leave him alone, even when he’s going to school

Little Sathya’s life changed from then on. His parents spent Rs. 35,000 and got him the hearing aid he’s wearing now. When he was 2, he started going to a school for children with speech and hearing disabilities. Asha accompanies him to school every day and has to stay with him through the day. The school is his happy, safe place. But Asha can see his struggle – he can’t even tell her when he’s hungry or wants something.


“Now he’s started just pulling me to the kitchen every time he wants to eat. Despite everything, our son is coping so well, but he will never be able to hear or speak without the cochlear implants that he needs.” – Asha, mother

The surgery will give Sathya a better life, you can help him

Vedavyas works as a waiter in a small hotel in Mysore. Asha can’t work because she has to stay with Sathya all the time – they have no way to afford the 8 lakhs needed for his cochlear implant surgery. Vedavyas’ income is just enough to pay the rent, household needs and his school. They have nothing as savings.

“I don’t have anyone to borrow from, and even if I did, I would have no way to pay them back. This surgery will help my son have a better life, and that’s all we want for him.” – Vedavyas

You can gift this 4-year-old the ability to hear and speak before it’s too late.

The specifics of this case have been verified by the medical team at the concerned hospital. For any clarification on the treatment or associated costs, contact the campaign organizer or the medical team.
Click here to save Sathya
Donate 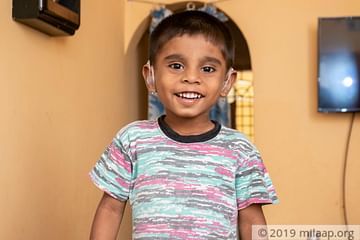 Sathya was only 1 when he went completely deaf. You can help him.