This Daily-wage Worker Lost His Job While Trying To Save His Son From Heart And Lung Disease | Milaap
loans added to your basket
Total : 0
Pay Now

s
You are sending a message to
sandhya
Go back

Shares
Shares
Share on whatsapp
Rajender is a mechanic who has been out of work the last three months because he is trying to save his 12-year-old son Sanjay's life. Sanjay has a hole in his heart – a condition that has destroyed his lungs. To survive he needs a heart and lung transplant at the earliest. Rajender is trying to arrange aid from government but Sanjay may not have time left.

Sanjay was in class 5 when his condition was finally diagnosed. By then his heart and lungs were already damaged. He started taking medicines and the doctors asked him to stop activities that increased his heart beat – like exercise, running and even taking the stairs.

Sanjay was to start class 7 this June. However, just 2 days before school, he fainted and fell down. His parents knew he had a heart condition and rushed him to the hospital in the nearest town – Khammam. At the hospital, his condition became worse and Sanjay came very close to death.


“His heart started beating very fast and his blood pressure also shot up. The doctors gave him electrical shocks for the heart to stabilise. After that, his situation has improved a little. He is able to walk and talk normally. But the doctors say it can go bad any time,” says Rajender.

Sanjay was saved from the brink of death this time. But the doctors have said that his situation may deteriorate any time. The second time, he may not be this lucky. Sanjay needs a heart and lung transplant now – when he has a good chance of recovery.

Sanjay with his brother Sathish. Sathish is alone in their village because the rest of the family is in Khammam for Sanjay's treatment

Rajender worked in a company as a mechanic in his village. He didn't earn much, but he was happy that he would get some pension when he would be old. When Sanjay became sick, Rajender took too many days off and had to quit work. Because he needed the money, he encashed his retirement fund that had come up to Rs 1 lakh for five years of work.

“I stopped counting how much I spend. I took my retirement money, and for the rest, I ask people I know. Small amounts come from different people and that is how we are managing to buy his medicines and take him to the doctor. I am going to government offices, but they say it will take time,” Sanjay explains.

Sanjay's mother Usha is very upset. She cries every day because she feels overwhelmed by the challenge in front of her

Besides his retirement savings, Rajender has borrowed another 4 lakhs for Sanjay's treatment. He has also moved to Khammam for treatment with Sanjay and his wife. They had to leave Sanjay's younger brother and their pet dog with a relative.

Sanjay used to be a child who loved life. He loved going to school and playing with the dogs and cows in his village. Since the doctor has asked him to take complete rest, his life has become dull. He is sad and keeps asking his father when he can go back home and lead his old life.

Sanjay's parents are heartbroken at seeing their son live so close to death. A heart and lung transplant will cost more than they can hope to arrange.

Contribute a little and help these desperate parents trying to save their child. 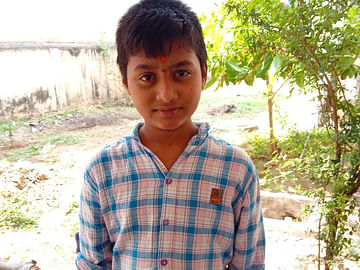 Help 11-Year-Old Sanjay Get A New Heart and Lungs

Sanjay's only hope of surviving his condition is a new heart and lungs. Help save Sanjay.