A Small Bruise In This 4-Year-Old’s Feet Turned Out To Be Cancer, He Won’t Live Without Help | Milaap
loans added to your basket
Total : 0
Pay Now

KV
You are sending a message to
KARTHI VENGATESAN
Go back

A Small Bruise In This 4-Year-Old’s Feet Turned Out To Be Cancer, He Won’t Live Without Help

Sanjay doesn’t like staying in the hospital and begs me to take him home every day. He was supposed to start school two months back and was so excited about it. It was then we found out about his cancer. He has his sister’s book with him and pretends to read hoping we would put him in a school. Sanjay even asks me daily “Amma, when will you take me to school?” I hide my tears and lie to him that we can go next week. It makes him smile when I say it but the truth is he might die in a few months if we fail to pay for his treatment - Poonkodi, mother

4-year-old Sanjay was playing with his friends outside his house one day when he hit his leg on a stone and fell down, bruising his toes. It was a small wound and his parents thought it would heal soon. But that night he woke up in the middle of his sleep, crying and vomiting continuously. The child’s foot started to swell and he had very high temperature.

We never imagined this small bruise would threaten his life

We took him to the nearby clinic where the doctor gave him medicines for fever and infection. He became normal but after a few hours, he got a seizure. The doctors couldn’t stop it and we took him in an ambulance immediately to a multi-specialty hospital. He was having fits all through the way. He went unconscious and the pulse went down quickly. I was helpless. He was struggling for life in front of my eyes and at one moment I thought I had lost him - karthik, Father

Sanjay’s seizures stopped only after the doctors operated on his leg to remove the infection. Before his leg healed his other leg started to swell. The doctors there refused to treat him further and the parents were made to sign a consent form in case the kid dies due to complications after the surgery. They asked the parents to discharge the kid and take him to another hospital.

He couldn’t walk and even his face started to swell. We must have taken him to five different hospitals  before he was admitted here. No one knew what was causing him this much pain. They tested him and after two weeks we came to know Sanjay had blood cancer. I couldn’t believe my own ears."

Little Sanjay needs continuous chemotherapy, blood transfusion and medications for a year will cure him completely.


"I work as a labourer in the panchayat office. I couldn’t find the money for his medical expenses and it was my friends who helped me till now. They lent me money but how long will I depend on them? They have their own expenses and families to look after and I’m already indebted to them. Doctors have hope that my son will live and but I’m in a helpless situation where I struggle even to pay for his daily medicines."

Sanjay has been under treatment for more than a month now. His parents need to pay 6 lakhs to continue his treatment and Rs. 4,000 daily for medicines alone. With a monthly salary of Rs.6000, the child’s father is struggling to afford it.

At the age of 4, this little boy is fighting to live. His family is struggling to keep him alive and only your kind contribution can save him. 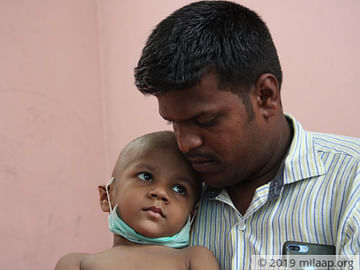 Father Struggles To Save Son From Deadly Cancer, He Needs Help

All this little boy wants is to start his schooling but this deadly disease is stopping him.

UPI: givetokarthivengatesan1@yesbankltd (Copy to clipboard)
Or
Click here to read the instructions before you make a bank transfer.