Airtel Sales Exec Struggles To Save His 6-year-old Daughter From Cancer For The Second Time | Milaap
loans added to your basket
Total : 0
Pay Now

"In October 2017, doctors said that 99.9% cancer wouldn't relapse and my daughter Sakthisri can live a normal life with regular check ups and medicines. She got discharged after a year and we went home with a great relief. I thought fate cannot be too cruel that the remaining 0.1% would come true but it happened to her. It is back and stronger than ever. This time, she can survive only with a bone marrow transplant." - Ilayaraja, father.

Sakthisri had recurrent fevers just within a month after her 4th birthday. Medicines did not help her and the scan reports revealed her disease - Acute lymphoblastic leukaemia, a deadly form of cancer that starts in the bone marrow where new blood cells are produced. Her parents were shocked and they started treatment the very next day. She had multiple chemo cycles and medicines. She recovered after a year. She was at home for 2 months in complete rest and then she started going to school.


"It was hard for anyone to believe that she had cancer; she was very active and cheerful.  She is in 1st grade and her class teacher told us that she is the smartest kid in the class. She got first rank and even won 1st prize in Chess. Last November, she had a fever, we thought it would subside but during our regular check up, doctors said that her cancer has relapsed." - Ilayaraja.

Sakthisri with her medal for winning 1st prize in chess

Sakthisri's fate is turning crueler with every passing day

Sakthisri's condition deteriorated in just a matter of days. Her blood count dropped drastically and she became extremely weak. Her parents took her to a hospital in Bangalore which has a high success rate for cancer treatment. She needs chemo cycles and bone marrow transplant to survive. Unfortunately, She has no fully match donor but her parents are haplo match (half-match) hence, one of them will be a donor.


"She has got severe mouth ulcers because of the side effects of chemo. She can hardly eat anything, sometimes she bleeds from her gums and it is terrible to see that. She has severe leg pain too. She has no strength to even talk."-  Sasikala.

Ilayaraja works as a sales executive in Airtel, his job is to sell sim cards. During the weekends, he puts a small stall in the street or in the apartments to sell more sim cards through which he gets Rs 2000-4000 as incentives depending on the sale. He did not get any incentives since last November because he now travels every weekend to Bangalore from his hometown Salem to visit his daughter and wife in the hospital. Sasiakala stays all alone in the hospital to take care of Sakthisri while her younger daughter Prathiksha (4) is now in her grandmother's house.

"Last time when she had cancer, she was in general ward and medicines were free of cost, so I managed it. This time, I sold our ancestral property - a small piece of land for 10 lakhs. With that I managed to start the treatment, but I need 46 lakh 50, thousand more. I cannot earn that money even if I work all the days in this year. Please help me save my daughter."

6-year-old Sakthisri is battling cancer for the second time and it is worse than ever. She needs a transplant to survive and there is no way that her father can afford it. Only your kind help can give her a chance at life. 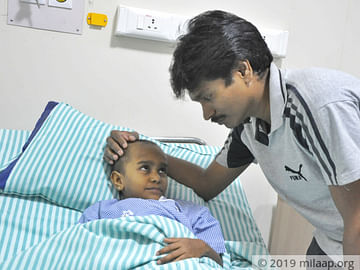 She Bleeds From Her Gums And Suffers From Excruciating Leg Pain, She Needs Urgent Help To Survive

Despite selling his land, father cannot afford treatment. He'll lose his child without your help.

UPI: givetoilayarajafunds1@yesbankltd (Copy to clipboard)
Or
Click here to read the instructions before you make a bank transfer.