This Laborer Is Running Out Of Time To Save His 2-Year-Old Son’s Life From Blood Cancer | Milaap
loans added to your basket
Total : 0
Pay Now

You are sending a message to
Kunj Bihari Roy
Go back

Shares
Shares
Share on whatsapp
From being playful and talkative to being in a battle for survival. In just a few months, 2-year-old Rudra was diagnosed with cancer which then became much worse. He now needs additional cycles of chemotherapy to survive. He needs to start treatment as soon as possible but his parents don’t have any resources left to save him.

Rudra used to be a very active child

Only 2-years-old, Rudra used to be an extremely active child for his age. He would play, climb, run around and do just about anything you’d expect a playful child to do. He was really talkative too and would start a conversation with every single person he met.

Suddenly, things turned upside down for the 2-year-old and he started having frequent fevers. His legs hurt and soon the pain became so excruciating that Rudra refused to walk at all. The pain in his stomach only added to his misery.

Shocked at his condition, Rudra’s parents decided to get a checkup. Rudra was diagnosed with Acute Lymphoblastic Leukemia, a type of cancer in the blood and bone marrow that spreads quickly.

“I was shocked to see Rudra in so much pain. He would run everywhere but now, he doesn’t want to put his foot to the ground because it hurts so bad. Our hearts broke when we found out he had cancer, but we’re staying strong for him.” – Kunj Bihari Roy, Rudra’s father

Rudra’s cancer intensified and it has changed his personality

Rudra, and his parents Kunj Bihari and Nilikumari traveled from their home in Jamshedpur to Kolkata. Rudra was admitted immediately, and Kunj thought that the situation was under control. However, Rudra's cancer has only gotten worse.

Rudra was at high risk with only a 50% chance of survival. The doctors then put Rudra through a higher dose of chemotherapy for a period of 52 days. This has severely affected Rudra’s mental health.


“Rudra is extremely frustrated and he’s not like how he was before. He cries a lot, has mood swings and also threatens to hit others. He makes excuses not to eat or drink the things he once liked. This is not like him. We’re going to show him to a psychiatrist because his mental health has been severely affected after these 52 days of constant suffering. I've been really depressed seeing him like this. ” – Kunj

Rudra urgently needs additional cycles of chemotherapy to live. His parents are very strong but are racing against time to save their son.

“My wife (Nilikumari) has been beside Rudra since the first day. She just wants Rudra back. It doesn’t matter if he looks different or loses his hair. She just wants him back alive and she is ready to do anything. She gives both of us strength.” – Kunj

Because his wife is with Rudra, Kunj is able to go back and forth from Kolkata to Jamshedpur juggling between his job and supporting his son. He doesn’t have any other means of support and is giving his sweat, blood, and tears to work more to provide for his son, who is fighting for his life.

Kunj is a daily-wage worker and needs help

Kunj works as a contract labourer in the manufacturing floor of a small company. He earns just Rs 5,800 per month and looks after his wife, another 5-year-old son, Shauri, and his elderly parents. He’s unable to save a single penny and has only managed treatment by borrowing money from his relatives. He has paid off Rs 1.6 lakhs for Rudra’s treatments up till now.

The estimated cost for additional chemotherapy is around Rs 6 lakhs. Even after receiving discounts from the hospitals, Kunj has no means to pay for this. Rudra's time is running out.

Only additional chemotherapy can save 2-year-old Rudra’s life. His father, Kunj Bihari, has no means of support and has no one left to ask for help. He desperately needs help saving his son.

Your contribution will save Rudra’s life. 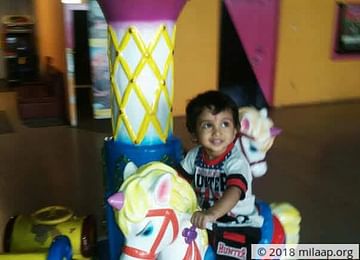 Only additional chemotherapy can save Rudra’s life. His father has nothing left to save him.