When he came home for vacation, he was so happy and excited to tell every tiny detail about his school and would tell some silly jokes to make me laugh. Now he lies in his bed looking weak and tired, unable to walk or even to sit. Whenever he asks me why he is losing so much hair, I would say it’s because of the fever he has. Tears fill his eyes every time he sees chunks of hair falling in his hands, every time he brushes his hair. He lost interest in everything that he used to love and just wants to go back home. Cancer has changed Roju’s life completely, emotionally and physically. - Pushpa, mother.

As a daily wage labourer, it's been difficult for Yesudas to look after his children and Roju never wanted to burden his parents in any way.  And so, he studied hard to get admission into Gurukul, a school that provides free education to children. His parents were the happiest when they came to know that Roju got admission into a government school that provides free education. He completed his 7th-grade final exams and was excited about spending his vacation with his family and getting into a new academic year. Right after he reached home, he developed high fever and in the following days lost movement in his legs.


“ Roju is very close to me and he always shares everything with me. He even learnt to play chess in school and he really loves playing it. He used to talk about participating in chess competitions, once the school reopens.  After he developed fever, he’s not even able to move his hands and legs.” - Pushpa, mother.

When Roju’s condition started getting worse his parents rushed him to the hospital. He underwent various tests and he got diagnosed with cancer. Roju is suffering from Acute Lymphoblastic Leukemia, a severe form of blood cancer that starts in the bone marrow and spreads into the entire body aggressively. Every time he tries to walk or stand, his legs shiver vigorously and he needs support to move his legs. He’s unable to eat food as the weakness in his body doesn’t allow him. Roju has undergone chemotherapy for 3 months and needs chemo sessions for 3 more months.


“When we were told that Roju has such a dreadful disease, we were in utter despair. I didn’t have the courage to tell my son is fighting a deadly disease, and so every time he undergoes a chemotherapy, I just tell him it’s for the fever and pain in legs that he has. With some help, I could start his treatment and now he’s making progress. He is able to walk with some support. I just want him to get cured of cancer and live a healthy life.” - Yesudas, father.

By borrowing money from others, Yesudas was able to start the treatment but now he is running low on funds

Yesudas is a daily wage labourer who earns Rs 300 per day. He has one elder daughter Yamini and one elder son Lokpal. With the meagre income he gets, it has been difficult to look after Yamini’s and Lokpal’s education when Roju is battling with a deadly disease. He borrowed about 4.5 lakhs which is to be paid with high interest. He could start the treatment with the money he borrowed, but now he has exhausted all the money he had and is in need of help.


“ I’ve made every effort to save my son from this fatal disease. Every penny that I have borrowed, I have spent it for my son’s treatment. I now have a standing debt of Rs 4.5 lakh and I am running low on money required to continue my son’s treatment. His health is improving since the treatment started and I just need some more money to continue the treatment and help my son recover from this fatal disease.” - Yesudas, father.

Roju is suffering from blood cancer which will spread into his entire body without urgent chemotherapy. His father could start the treatment by taking loan but now he’s running low on funds. Yesudas has a standing debt of Rs 4.5 lakh and has exhausted all the money he has for his son’s treatment.

Your support can help Roju live 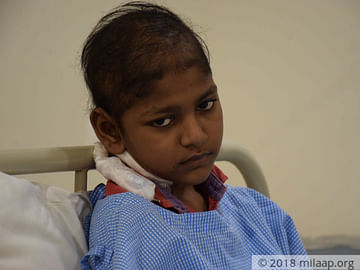