After A Near-Fatal Accident, Ravi Needs Your Help To Live His Life | Milaap
loans added to your basket
Total : 0
Pay Now

Shares
Shares
Share on whatsapp
Ravi was excited to go home to his village and spend time with his family after a long week at work. Unfortunately, Ravi didn’t make it home that weekend. As he set off on his bike from work, Ravi met with a fatal accident. An oncoming car hit his bike, leaving both his legs and right hand severely injured and fractured. Ravi survived, but he needs to undergo several reconstructive surgeries before he can walk again.

28-year-old Ravi is a hardworking young man. He worked as a driver for a small workshop, transporting steel and manufacturing grills. Ravi is from a small village on the outskirts of Bangalore. After school, he decided to start working to financially support his parents. Ravi’s father was a daily-wage labourer. Ravi then took it on himself to provide for his family. His parents were very proud of the progress he was making at work. Ravi worked hard through the week, and visited his parents in the weekend.

“The accident changed everything for us. My son is so helpless now. He can’t even stand up, let alone walk. He feels weak and powerless. Ravi was so dedicated to his work and worked so hard to take care of us, he doesn't deserve this,” his father says.

Ravi with his parents.

Ravi suffered severe injuries to both his legs and right hand. He was also bleeding profusely and suffered a head injury after the accident. Ravi was rushed to the hospital, where he was on the ventilator for two days before he woke up. His right leg was immediately operated on. Ravi hasn’t been able to stand up or walk ever since that fateful day two months ago.

Ravi with his cousins.

Ravi Hasn’t Given Up Yet

The accident hasn’t crushed Ravi’s spirit. He is determined to get the surgeries done, get back on his feet and return to work to support his parents. Ravi still needs to undergo several reconstructive procedures, including orthopaedic and plastic surgeries to cover the wounds on his legs. It is his only chance of being able to walk again. Unfortunately, Ravi’s parents can’t afford to pay for the surgeries that are estimated at Rs 3 Lakhs. They have already borrowed from family members and managed to pay Rs 1.5 Lakhs for his first surgery immediately after the accident, and they have no more money left.

“I just want my son to be able to walk again. He doesn’t deserve to be bedridden. He tells me every day that he wants to get better. He hasn’t given up, but I’m afraid if we are not able to pay for his surgery, he might never be able to do all the things he wanted to.”

Ravi’s father is struggling to find work. Ravi was the sole earning member of the family, and the accident has put them in a difficult position.

Ravi needs to undergo reconstructive, orthopaedic and plastic surgeries to be able to walk again. Ravi is the only earning member of his family. He hails from a small village on the outskirts of Bangalore, and his parents can’t afford to pay for the surgeries. He needs Rs 3 lakhs to get the surgery done and lead a normal life again.

Your contributions will help Ravi get back on his feet again. 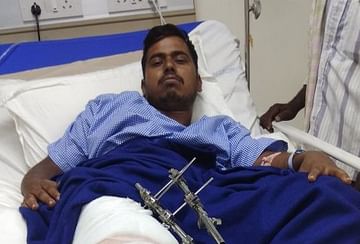 Ravi's legs are shattered and without surgeries, both he and his family will be left crippled