The Truth About This Man's Fight For Survival Will Break Your Heart | Milaap
loans added to your basket
Total : 0
Pay Now

“In February 2018, after his liver completely stopped functioning, he was completely disoriented. He was so critical that he suffered from temporary memory loss. He didn’t know who we were or where he was. He was completely out of control and he’d even become violent and hurt others unknowingly. With my mother crying endlessly, the rest of us were terribly scared and we thought we might lose him.” – Rajeshwari, Raosaheb’s 22-year-old daughter

58-year-old Raosaheb’s liver has been completely damaged for over a year and this has even caused severe loss of brain function along with a lot of pain. He needed a liver transplant way back in 2017. He has miraculously survived for so long but he doesn’t have much time left. His 22-year-old daughter, Rajeshwari, is ready to donate a part of her liver, but being the sole breadwinner of his family, Raosaheb just doesn’t have any money left.

When he fell unconscious, the doctors asked the family to prepare themselves

In August 2018, Raosaheb was critical and along with his family, he came to Mumbai from the faraway district of Parbhani. As soon as he got to the hospital, he just fell unconscious. Right now, after all these months, he’s so weak that he can’t even speak properly or audibly.

“Back in August, the doctor said that anything could happen in the next 2 days. My mother had broken down and couldn’t see my father fight for his life on the ventilator in the ICU. There was so much water in lungs that he couldn’t breathe. For the second time, we thought we might lose him anytime. It’s such a hard time for us.” – Rajeshwari

It is a miracle that he survived these past 5 years

It all started in 2014 when Raosaheb’s hands and feet would swell up and he’d be struck with waves of fever. It just happened so suddenly that he was left with no energy to do anything.

“He had become so weak that he couldn’t even move his legs. He’d just be tired all the time and wouldn’t want to eat.” – Rajeshwari

Raosaheb would travel alone 200 km every 2 weeks for treatment

After a local doctor told Raosaheb that there were excess fluids in his stomach, he had to go for treatment every 2 weeks to a hospital in Aurangabad which is 200 kilometres away since there were no hospitals in Parbhani.

“He did this for over 2 years. By the end of 2017, there was water filling up in his lungs too. He’d go alone to Aurangabad despite of his sufferings. That’s when the doctor first said that his liver had been completely damaged and he needed an urgent transplant.” – Rajeshwari

He is racing against time to receive a transplant

58-year-old Raosaheb has 4 children: Krishna (12), Dhanashree (17), Radhika (20) and Rajeshwari (22). He was the only earner of his family and his wife, Rekha, is a homemaker. All his children go to school and no one works. From the pain and weakness of his failing liver, Raosaheb quit his job in a private company in 2018, where he’d earn up to Rs. 20,000 every month.


“Our home rent is around Rs. 8000. Every 2 weeks, he spent Rs. 15000 to get fluid removed from his stomach. Traveling so far away was a challenge. There were many times he needed someone to hold him because he couldn’t walk and we had to take a car which would cost us Rs. 5000 for 200 km. I just don’t know how we’re going to pay for this transplant. We’ve borrowed from everyone we could. He is so frustrated because he doesn’t want to be a burden and recently for the first time, I saw him crying about it.” – Rajeshwari

Raosaheb has been suffering in silence for 5 years. Back in August 2018, his ICU bill was over Rs. 5 lakhs. Over the past few years, they have spent Rs. 25 lakhs on his treatment. His brothers have sold their farm to help him. Now, he’s hanging on to life by a thread and his family needs Rs. 20 lakhs for an inevitable and urgent liver transplant.

He has been constantly going back and forth from Mumbai but just around a month ago, he was so critical that he had to be admitted to the hospital. They can’t afford to live in Mumbai for long and may be forced to take him home.

22-year-old brave Rajeshwari has been matched as a donor and is ready to save her father’s life. But she can’t do it without your help. 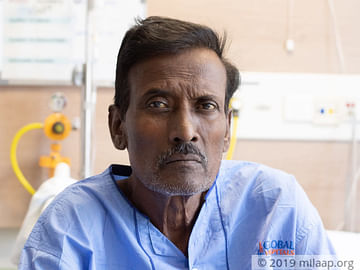 Raosaheb has been suffering for over 5 years

He used to travel 200 km every 2 weeks for treatment. Now, he is hanging onto life by a thread.