This 6-year-old Has Severe Anemia And Needs A Bone Marrow Transplant To Survive | Milaap
loans added to your basket
Total : 0
Pay Now

"I married within the family. The doctor said it is a gene-prone disease, and he mostly likely got it because we all have the gene, and we increased the risk by marrying within the family. I want to do everything possible to help my son. He is suffering because of us."

Raghunandan was 8 months old when he was diagnosed with Thalassemia, a rare genetic disorder that causes severe anemia in the body. Although he is surviving on blood transfusions, this child needs a permanent cure that can help him not just survive, but live. Raghunandan needs a bone marrow transplant at the earliest. Without it, he is most likely to succumb to the side effects of long-term blood transfusions including stunted growth.
This story is written from the perspective of Raghunandan's father, Mumoorthy.

We are from a village called Kaveripattinam. I came to Hosur after I got married in search of better prospects. My wife, Ambika, and I live here with our son, daughter and my parents.

I work for the family as a barber. My income is around Rs. 250/day. Ever since Raghunandan was diagnosed, I have been trying to make more money by working extra hours or taking up another shift at a nearby salon. Yes, it has been tough on us, but so far, I have made ends meet.

When Raghu was around 8 months old, we noticed he was a little dull. There was almost no activity. His head was not holding up like other children his age. In fact, his development was off the map. We went to the doctor about our concern. They said he was anemic, and a few tests in his 10th month revealed that he had thalassemia. It has been a few years since then. Every 20 days we go to Bangalore for a blood transfusion.

If we miss even by a day or two, you can see a clear change in his condition. He would be hyperactive, completely normal and suddenly, he wouldn't move. He won't talk, he won't walk. He would just sleep. His eyes would go white. And, we would have to rush him back to the hospital. This is our life.

It costs us about Rs. 12,000 each time, and you can imagine how much that amounts to in 5-6 years.  He is going to school. He would be exposed to germs, other children, and a lot of stress. That would impact him immensely. His development, like I said, is not like other children.

He looks smaller, his physical stature would make you think he was 3 years old. He has a memory problem. He wouldn't remember what you told him yesterday. Like this, he has a few issues that would affect him in long term.

Even the doctor has told us, what long-term transfusions would do to him. Bloated stomach, affected liver, a protrusion in his head, and we do not want this for our son. He might even succumb to an infection. I don't want to lose my son.

A bone marrow transplant can cure him. Stop all this pain. End his suffering. We want to help him. Unfortunately, no matter how long we try to save up, borrow or work hard, we are unable to come up with Rs. 15,00,000. I have already spent that much on his treatment so far, and now I have nothing. They told us about this platform, and how there may be people who would understand our plight.

I request you to help Raghu live a healthy life.

Click here to contribute to Raghunandan or for more details on this campaign.
Donate 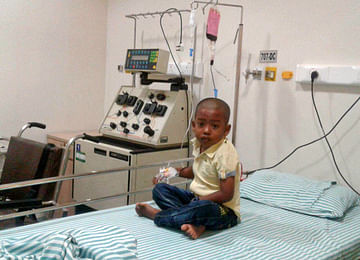 Help Raghunandan Get A Permanent Cure For Thalassemia

This boy's father has been trying hard to arrange for funds but he needs help to get his son the...