Husband’s Sudden Death Has Left This Mother Alone In Her Struggle To Save Son’s Life | Milaap
loans added to your basket
Total : 0
Pay Now

“My husband died of a heart attack suddenly. Two months later, I found out that both of my son’s kidneys had completely failed. At that moment, I thought I would lose him too. That feeling still hasn’t left me. He’s only getting sicker. He can’t even breathe on his own now. He doesn’t talk much, when he does, he asks about his father and when we can go home again.” – Vasantha, mother

Prajwal never says no to any medicine or injections. Even the dialysis he gets every alternate day, he quietly endures. Prajwal doesn’t have the energy to fight this any longer. The only thing that can save him is a kidney transplant soon.

His older brother quit his studies to support his treatment

Her husband’s death and Prajwal’s illness has left the entire family devastated. Vasantha struggled to juggle between working and taking Prajwal to the hospital. But now, she can’t leave his side. Her older son Preetam (16) has now quit his studies to stay in the small coffee stall that they have. It’s their only source of income.

“He should be in college now, but he said saving Prajwal is most important now. He sits in the shop all day, while I’m in the hospital here.”

Vasantha and Preetam are doing everything they can to save Prajwal, but just yesterday he fell terribly sick and had to be admitted to the hospital again. This is going to keep happening unless he gets a kidney transplant.

Prajwal was only 3 when he was diagnosed with kidney disease. For 10 years, he survived on medicines. He even continued to go to school. They thought his disease was under control until last year in March when he fell terribly ill. Ever since then, Vasantha has been spending more than Rs. 3000 on his dialysis which he needs every alternate day. That’s how serious his condition is now.


“We don’t even earn that much in a day. I have borrowed from so many people to continue his treatment so far. The medicines and even dialysis now is useless for him, he needs a kidney transplant before it’s too late.”

It’s been a year since her husband’s untimely death. Vasantha is still grieving. But all she thinks about now is saving Prajwal. She can’t imagine losing him too. This single-mother needs your help to save her son.

The specifics of this case have been verified by the medical team at the concerned hospital. For any clarification on the treatment or associated costs, contact the campaign organizer or the medical team.
Click here to save Prajwal
Donate 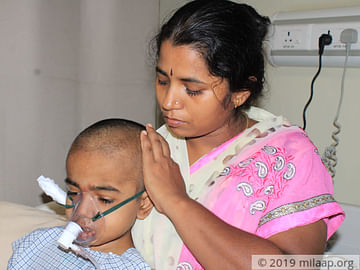 His Brother Quit His Studies To Afford His Treatment, But It's Not Enough

Prajwal needs a kidney transplant at the earliest to survive.

UPI: givetovasanthafunds1@yesbankltd (Copy to clipboard)
Or
Click here to read the instructions before you make a bank transfer.