Save This LKG Student Who Is Vomiting Blood And Crying In Pain Because Of Blood Cancer | Milaap
loans added to your basket
Total : 0
Pay Now

You are sending a message to
Mahipal Dan Charan
Go back

"Nishi is a chatterbox. If anyone asks for her name, or how she is doing, she will end up talking about her entire family history. She can make anyone feel warm and happy. Now, instead of those chirpy words, I only hear her crying all day and night."

Just when she was about to graduate from LKG, Nishi was diagnosed with blood cancer. Her parents never noticed any symptoms and were completely taken by shock when she began vomiting blood. In less than a week, her condition deteriorated, and she is now fighting hard against the deadly disease. Her father has been running around trying to find a way to save his little girl, while his friends are raising funds for her treatment.

23rd January was a normal day except that Nishi’s forehead was warm, and her parents took her temperature. The family physician prescribed medicines for her fever, and she went to sleep soon after they went home. When Nishi woke up with a high temperature, Satendra (father) decided to go back to the doctor. He suggested blood tests if the problem continued.

“The medicines were obviously not working. Even if she sneezes, I freak out, so I decided to take her to Vatsalya Hospital. There the tests showed she has typhoid. She needed platelets, and just after the first transfusion, she began vomiting blood. Even her poop had blood.”

Her insides hurt so much that she has been crying continuously

More tests confirmed Satendra’s worst fear. Nishi has blood cancer. She was referred to Sanjay Gandhi PGI in Lucknow. The family rushed there from Pratapgarh. On 29th January, she was taken to the ER. Nishi’s condition was critical as she was vomiting blood violently, had a high fever, and diarrhea with blood.

“It was scary. For 10 days, she has been crying continuously. Even in the hospital, throughout the night, you can hear her going ‘uuuuuuuuun, uuuuuuuuun’. Her insides are twisting. I cannot even imagine the pain she is in. Thankfully, the medicines have brought the vomiting in control. She is currently silent holding on to me or Shalini.”

Satendra and Shalini are awaiting a prognosis. While Nishi has started chemotherapy, it is only temporary. She needs a bone marrow transplant. Satendra works at a private firm, and even though he keeps his family comfortable, he is short on funds during this emergency.

“I have spent over Rs. 2 lakhs now. I have been asking my friends. If it was not for RK Jaiswal or Mahipal Dan Charan, I would have lost her already. They have been helping me raise funds for her treatment. Regardless of how much you earn, during such times, you feel poorer than ever. This treatment will bleed us dry, and I am afraid I will not be able to save her.”

Satendra and Shalini need all the help they can get to save Nishi’s life. She currently requires Rs. 5 Lakhs for chemotherapy and supportive care. After this, the doctors will decide the further course of treatment.

Your contribution can save 5-year-old Nishi’s life and help her graduate LKG. 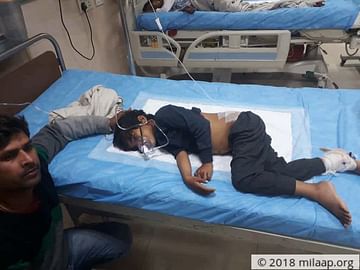 Nishi is 5. She has blood cancer and her condition is deteriorating. She needs urgent treatment...