A Near-Fatal Accident Has Left This Father Fighting For His Life In The ICU | Milaap
loans added to your basket
Total : 0
Pay Now

RB
You are sending a message to
Reena B
Go back

“When I called my husband, someone from the hospital picked up. They told me he had met with a serious accident. I thought it was a cross-connection and hung up. I called back and realized it was true. I began trembling all over and hugged my daughters. Our world came crashing down that day. Nothing has ever been the same since then,” Shilpa, Nataraj's wife.

On November 4, 2017, Nataraj met with a near-fatal accident on his way to work in Electronic City, Bangalore. His bike was hit by a lorry from behind, and he was quickly rushed to the hospital. Nataraj suffered serious head injuries and fractures near his eye. His right arm was also severely fractured. There was a lot of bleeding from his ears, nose and mouth. Nataraj had two surgeries for his hands and eye. Nataraj is recovering, but will have to stay in the ICU for a few more weeks to completely get better.

Nataraj, 40-years-old, was brought in to the hospital unconscious. He was in a coma for 15 days before he opened his eyes. When he did wake up, Nataraj recognised no one. Not even his wife of 6 years. His young daughters, Sindu and Bindu, haven’t seen him in a month. Nataraj cannot eat, talk or walk any more.

“He’s been in the ICU ever since the accident. They feed him through a tube. Our daughters ask about him every day and I keep telling them that he will come back home soon. They miss their father very much. They haven’t even been able to see him because they’re only 7 and 5 years old. Maybe if he sees them he’ll remember something, maybe that will help him. He stares at us with a blank expression. It breaks my heart to seem him like that.”

Shilpa is 3 months pregnant. They only recently found out that they were expecting their third child. This should’ve been a time to prepare for the arrival of a new family member. However, Shilpa is extremely stressed. Not only does she have to take care of her two daughters, she also must worry about paying for her husband’s treatment all on her own, along with her pregnancy.

Nataraj uaed to be the only breadwinner of the family. He worked as a helper at a garment company and earned Rs 6,000 per month. This in no way even begins to cover what has been spent on his surgeries and medication. Shilpa got by so far with a little help from her family. However, the medical costs have only increased. They were forced to sell their house in their village in Hosur to pay for his treatment. They’ve lost everything now.

“We borrowed a little money from our family, but there’s only so much they can do. We even sold our house in our village, but we still can't afford the treatment. What will happen to my children if we can't save him? ”

They have already spent Rs 13 Lakhs on Nataraj’s treatment so far. Nataraj needs another Rs 12 Lakhs to undergo further treatment. He needs ICU care for a few more weeks, medication and possible surgeries to be able to get back to being healthy again. Shilpa simply cannot pay for the expenses any longer.

Nataraj met with a terrible accident that caused a serious head injury, fractured his right hand and bones near the eye. He then suffered a stroke that has completely paralyzed him on his left side. His wife is struggling to make ends meet, and his children miss him terribly. Nataraj needs to be under ICU care to get better again. Nataraj has made considerable progress in one month. He can get better and go home to his wife and children with your help.

Your support will save Nataraj’s life. 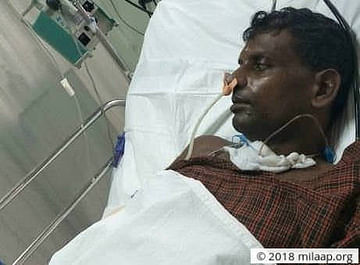 Nataraj met with a traumatic accident and suffered severe head injuries. He needs your support to...