Only A Liver Transplant Can Save This Girl's Life But Her Unemployed Father Can't Afford It | Milaap
loans added to your basket
Total : 0
Pay Now

v
You are sending a message to
varma.sharat
Go back

Shares
Shares
Share on whatsapp
Nafisha is closest to her father. She hated when he had to stay away from home for work. The only thing she looked forward to were their visits to Odisha, where her father, Aliul, worked. Even now when she is terribly sick, weak and tired, all she wants is for her father to be near her. Aliul, too, doesn’t leave her side. He does everything he can to comfort his daughter but at the back of his mind, he is afraid.

Aliul’s 9-year-old is suffering from liver cirrhosis. Even medicines can’t make her feel any better. She needs an urgent liver transplant. But with no job and nothing left in his pockets, this helpless father doesn’t know if he can afford it.

For the last one year, Nafisha has only been around hospitals and doctors

In March, last year, when his kids and wife, Kamrun Nahar,  had come to visit him, Aliul noticed that Nafisha’s eyes had a yellowish tinge to them. Suspecting that it could be jaundice, he immediately to her to a doctor.

“All of a sudden she had become so weak. I was very scared, this didn’t seem normal. The doctors in Bhubaneswar admitted her for 10 days. When she was discharged after that, we thought there would be nothing to worry about,” - Aliul, father.

But he was wrong. Few months after she was discharged, she started having high fever and swelling in her hands and legs. A series of tests were done and they got to know that their daughter’s liver was damaged.

It was heartbreaking for us, we hoped medicines would cure her

Till last December, Nafisha had been on a strict diet and an even stricter prescription of medicines. But nothing seemed to make any difference. Her weakness increased and so did the swelling. Her condition was worsening with every passing day.

“We thought we would lose her forever, every minute was critical. She had to be admitted again. I didn’t think she will come back alive but she did. I am so grateful to God.”

But the doctors this time told Aliul that only a liver transplant can cure his daughter.

Nafisha is tired of all the restrictions in her life. She is only 9 but instead of going to school and playing with her friends and her little sister she is living on medicines. Since last year, she has been staying away from her mother and sister - she knows there is no choice but can’t help but miss them.

“I have been the one taking her to hospitals, doing all the running around. My wife has to stay at home to take care of our younger daughter. I haven’t been able to keep my job, I had to be there for Nafisha. But now even affording her daily medicines have become difficult.”

She needs the transplant as soon as possible but Aliul can’t arrange 17 lakhs. He has already spent over 5 lakhs - his savings are almost over. Without help, this father will lose his daughter.

With your kind support, Nafisha will get a new life 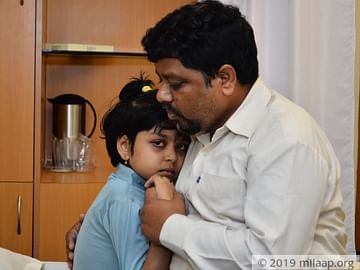 She Thinks I Am Her Superman, Only If I Can Save Her

Aliul's 9-year-old's liver is fully damaged, she needs an urgent transplant to live

UPI: givetomlpaliulislam1@yesbankltd (Copy to clipboard)
Or
Click here to read the instructions before you make a bank transfer.