This 5-Year-old Will Die of Cancer If She Does Not Get Treatment Immediately | Milaap
loans added to your basket
Total : 0
Pay Now

Shares
Shares
Share on whatsapp
5-year-old Mosammat Moon never moves from her mother's side. You can see the fear on her face when her mother steps outside the hospital room. She wants to run to her mother but she cannot. Her legs have given up and she is in terrible pain. She doesn't know what is happening around her, the nurses hurt her hand with needles, her mother cries often and her father seems restless. Mosammat cannot wait to go back home.

This little girl is suffering from cancer which is spread to her bones and bone marrow. Her parents who live in poverty cannot afford even her medicines.
She could hardly walk and lost weight drastically

Mosammat had recurrent episodes of fever and a very low immunity right from her birth. Her parents did not understand why she develops fever often.They had consulted seven different hospitals in their hometown in Bangladesh and everywhere blood tests and scans couldn't reveal anything but fever. Finally, they travelled to Bangalore with whatever money they could arrange based on their friends' suggestions. Tests taken at the hospital revealed that swelling in her stomach is cancer and it can be fatal if not treated early.

This 5-year-old is unable to walk due to pain

Mosmammat is the only child of Alangir Kabir and Shanaz Parvin. Seven months ago her condition deteriorated. She had terrible knee and stomach pain and which affected her movement. She has stopped trying to walk because it hurts so much.

She was diagnosed with Cancer

Even though the family has no money left, they decided to proceed with the treatment as recommended by her doctors. Mosammat had begun her chemotherapy and is expected to continue for next 10 months. She has to undergo a surgery first, this will be followed by a bone marrow transplant and radiotherapy. They require Rs 27 lakhs for this entire treatment

“I feel guilty for delaying the treatment, I wish they had found the condition atleast in one of the hospitals in our hometown and given her the right treatment."

Her mother, Shanaz, is feeling terrible to see her child undergo a lot of pain. They have rented out a room in Bangalore to stay and visit the hospital. She is trying to help Mosammat start walking again. She dreams of sending her daughter to school.

“I don’t care what I go through as long as I can save my daughter. I can accept any hardship to help my daughter recover completely. I will do whatever it takes to save her”

Alangir Kabir has spent a lot of money to travel to Bangalore. He was forced to quit his job in a construction firm and leave behind everything he owned to save his daughter. He has absolutely no source of income now. He is not sure if he can afford to stay in Bangalore till the treatment is over. The treatment is very crucial and if they discontinue it will be fatal for Mosammat.

Alangir and his wife are determined to bear any hardships for the sake of their child. Mosammat’s condition is improving with treatment and if they can continue without any delay she will be recovered completely. With our support, this little girl's life can be saved. 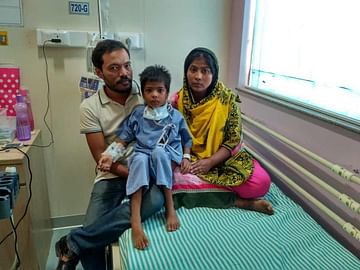 She has stopped walking and is in a lot of pain. Her parents cannot afford the treatment