The Tumour In Her Brain Is So Painful That She Holds Her Head And Cries For Hours | Milaap
loans added to your basket
Total : 0
Pay Now

Shares
Shares
Share on whatsapp
Mayuri hasn’t had a single night’s sleep for the last one week. She has severe pain in her stomach and has been throwing up continuously. Her parents, Nilinesh and Monica, are trying their best to comfort their 12-year-old daughter, but she is in too much pain.

No, Mayuri is not suffering from a  bad case of food poisoning. This little girl has a tumour in her brain and she is under strong radiotherapy. Despite the horrific side effects of the treatment, she can’t be taken off it. That’s the only way she can get better.

Something is inside my head Maa, I can’t bear this pain anymore

Mayuri couldn’t get up from her bed that day. She said she had a throbbing pain in her head. Painkillers were of no use - she just held her head and cried inconsolably.

“It soon became worse. She started vomiting and we knew there was no time to waste. They suggested a CT scan and soon we found out that Mayuri has a growing tumour in her brain,” - Monica, mother.

This was last December. From then, till now, Nilinesh and Monica, have been doing everything in their capacity to make Mayuri feel better. But Mayuri is getting critical.

The tumour keeps coming back despite 2 surgeries

Mayuri had her first surgery in January this year. Her parents were scared but consoled themselves thinking that this could make their daughter better. She was better for 3 months but after that, the stubborn tumour was back. Worse than before.

“They said she needs another surgery. But this time I was not ready for any risks. I took her to Bangalore hoping that this would be the last time I would see her go into an operation theatre, hoping that this surgery would take away her pain,” - Nilinesh, father.

But Mayuri still needs treatment - there is a high chance of her tumour coming back if her treatment is discontinued.

The helplessness is killing me

Nilinesh is a farmer in Tripura, he doesn’t make much. Not enough at all, to afford his daughter’s treatment. He has mortgaged his land, borrowed from his relatives and has spent over 9 lakhs till now. He needs 4 lakhs more.

“Mayuri keeps asking me when she can go home, she hates the hospital food. I have no answers to her questions. She wants to know when her tumour will be cured, she misses her friends. And I keep making up excuses. I don’t know how long I can do that - this helplessness is killing me

This 12-year-old has become very weak because of the tumour. She needs continued radiotherapy, but her parents can't afford it. They need your help - a generous contribution can make a big difference to them 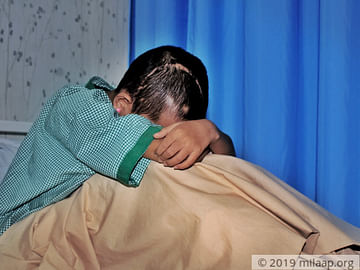 She Hasn't Slept For One Whole Week, She is Getting Very Critical

A tumour in Mayuri's brain is growing rapidly. She needs urgent treatment - you can help