Boy Bullied By Friends For Not Looking His Age Because Of Kidney Disease Needs Transplant | Milaap
loans added to your basket
Total : 0
Pay Now

“My son is 10 now but he still looks like he is in the 1st standard. His friends  in school make fun of him because he is shorter than them and can't keep up with them in P.T. class. We thought he is not eating enough nutritious food so we took him to the hospital to get supplements. We were shocked when doctors said that he is not growing because his kidneys are damaged.” - Puran Singh (father).

Varun's growth has been stalled for the last 5 years

When Varun turned 5, he weighed only 10 kilos (the ideal weight should be 14-18 kgs for his age). Although he wanted to play like his schoolmates, his body didn't allow him that. His parents did not take it seriously, their concerns grew only when he began to lose weight drastically. His kidneys can't filter blood as it should and waste builds up in the blood. His body can't process growth hormones and in turn, his growth is stalled.


“ They said he has to follow a strict diet and have medicines regularly in order to stay alive. He eats only bland food with no salt and spice. He cannot have any of his favorite fruits like watermelon, grapes or oranges. We do not buy chocolates even for his birthday. He got used to it, now he has stopped asking us for sweets.”

“Despite all our efforts his condition became worse”

His parents, Puran and Manju were hoping that one day, he would be completely cured and he can live a medicine-free life. Unfortunately, last month, Varun lost his appetite completely. He was not able to eat anything and began to throw up even water. His condition deteriorated fast and now he needs an urgent kidney transplant or else his other organs will also be affected. He is on dialysis every other day.

“He has a port connected to his neck for the dialysis. He feels like pulling it away as it irritates him. He gets tired after the 4 long hours of dialysis and sometimes the pain is unbearable but he doesn’t complain much. All he wants is to go back home.”

Puran Singh is an electrician and earns Rs 8000 per month. He has to spend Rs 2500 for his rent and with the remaining money he takes care of his wife and 3 children. The transplant costs 7 lakhs. One of the parents is a potential donor but they do not have money even for the tests.

Varun was mocked by his friends for looking smaller than them. His growth is stalled because his kidneys are damaged. He was on strict diet for 5 years, still his condition became worse. He needs your help. 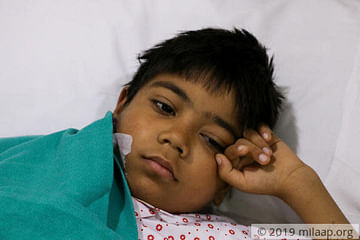 Despite all the efforts, his condition became worse and now his parents need your help to save him.