Auto Driver's 11-Year-Old Will Slip Into Coma If He Doesn't Get Treatment To Fight Cancer | Milaap
loans added to your basket
Total : 0
Pay Now

“Our lives have drastically turned upside down in no time. Just 15 days ago he seemed healthy and was playing outdoors, today my son is on the hospital bed fighting deadly cancer. We were told without urgent treatment he would slip into a coma. I rushed for help and borrowed huge amount to start the treatment, though I knew I have to work all my life to pay back. But now, I don’t even have a rupee to continue his treatment,” - Rayappa, Sagar’s father.

Dreadful cancer has left this family in a desperate state

Two weeks ago, when 11-year-old Sagar was playing cricket with his friends he fell on the ground and hurt himself. Next day his gums started bleeding, thinking he hurt his teeth during the fall, his father consulted a dentist. He was sent back with an assurance that the medicines will cure him. But the very afternoon Sagar’s gums started bleeding again and he complained of severe stomach pain. Suspecting that there is something wrong, Rayappa took him to another hospital.


An old photo of Sagar

“The blood test revealed that his platelet and blood count was extremely low. I immediately admitted him and he underwent platelet and blood transfusion and I waited for the other test results. The doctor told me that my son was diagnosed with blood cancer and his condition is very critical, without immediate treatment he might slip into coma. The words cancer and coma sent shivers down my spine,” - Rayappa.

The disease will soon kill Sagar without continuous treatment

Sagar is suffering from Acute Myeloid Leukaemia, a type of blood cancer with rapid growth of abnormal white blood cells. These cells crowd the bone marrow, preventing it from making normal blood cells. Only with the help of chemotherapy the immature cells can be controlled and soon destroyed. If it is left untreated, the disease will take once life. Sagar is in a severe stage and he may soon succumb to the disease without continuing chemotherapy treatment for more than six months.


“A week ago, he was widely opening his mouth to gasp air, the doctors have rushed him to the ICU. They told his chest was filled with puss. Though they cured it and shifted him to the general ward, at times he still struggles to breathe. He lost his appetite because of high fever and medication. We feed him forcibly saying that we will take him home if he eats well. But how long can we continue with these lies? He cries when his friends call him, He misses his school and playtime,” - Sujitha, Sagar’s mother.

Rayappa drives a rented auto for a living in Guntur, he earns Rs 250 a day and his wife Sujitha works as a cleaner in a tiffin centre for Rs 150 a day. The couple stopped working the day their child was admitted in the hospital. Sujitha might soon lose her job. They borrowed three lakhs from their friends and spent every rupee to save their son. Now they are even struggling to afford a meal a day. Only continuous chemotherapy treatment can save Sagar from death but the poor parents have nothing left to save him.


“Everything happened so quickly that I did not even get time to think. I sold my wife’s anklets and earrings, the only gold she ever had in her life. We stay in a rented house, I am not sure how I am going to pay the rent this month. All I want is my son to be alive. I’ll do anything to save him but his treatment costs 8 lakhs which is beyond my means,” - Rayappa.

Sagar needs urgent treatment to beat his cancer. But the parents have lost everything to save him. Your kind contribution can help him survive. 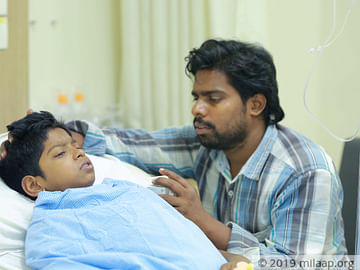