Last Night They Almost Lost Their Baby, He Needs A Surgery Tomorrow To Survive | Milaap
loans added to your basket
Total : 0
Pay Now

Last Night They Almost Lost Their Baby, He Needs A Surgery Tomorrow To Survive

Shares
Shares
Share on whatsapp
Last night was tough for little Priyanshu. He was rushed to the ICU away from his parents, as he struggled to take even a single breath. When he woke up this morning, his worried parents stood around him – they had waited for hours for him to wake up.

Hemant and Poonam nearly lost Priyanshu last night to his severe heart disease. And this can happen again if Priyanshu doesn’t get a surgery tomorrow. That leaves Hemanth with 24 hours to save his 9-month-old baby.

Hemant has taken Priyanshu to over 6 hospitals in the past 9 months, and they all had one thing to say – your son is very sick, but we can’t help him here. Hemant almost lost hope until he went to Delhi.

“They told me I can save him, that was the only moment in these past 9 months that we’ve found some hope, even a little bit of relief… but one day is just not enough for a poor man like me.” - Hemant, father

Hemant hasn’t even been able to go for work regularly because of how often baby Priyanshu has been admitted to the hospital – at least for 5 days every two weeks. That’s how serious his condition is.

With no income or support, they have no way to save their baby in 24 hours

It has been a struggle to even get Priyanshu to Delhi. The overcrowded train, a wailing baby and a ticking clock – Hemant and Poonam have done everything in their power to bring him here. They have left their two older children behind. Hemant, who works in a shoe factory, has no income now.

“I couldn’t afford to take him to a bigger hospital earlier, I have no savings. I even had to borrow money to come here…how can I give up on the one chance my son has? I had to do it at any cost…but now that I’m here. I have nothing to afford the surgery.”

Priyanshu needs the surgery tomorrow. You are his only hope. 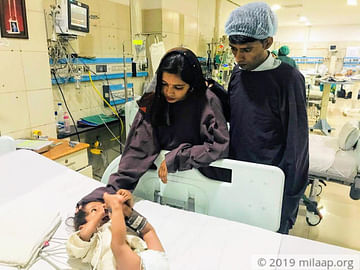 This Baby Has Been In Pain For 9 Months

UPI: rzpy.givetomlppriyansh019@hdfcbank (Copy to clipboard)
Or
Click here to read the instructions before you make a bank transfer.