You are sending a message to
hemchand k prasad
Go back

Shares
Shares
Share on whatsapp
9-year-old Haasan‘s growth has stopped due to a rare medical condition called hypopituitarism where the body cannot produce hormone essentials for growth. His parents Palani and Roja are devastated and the very thought of his future has become a nightmare for them.

When Roja became pregnant with Haasan, she and her husband feared that the baby might have genetic problems. Palani’s brother was born handicapped, and this led them to suspect that the tragedy might continue in the next generation as well.  Right from the first scan of the pregnancy till the delivery, they went to a private hospital. They were willing to do anything to avoid risks.

"He was born healthy. We were so happy but when he turned 5 our lives turned upside down. Haasan had a huge swelling in his throat and he had severe breathing trouble. He began to bite his tongue whenever he could not breathe and would start bleeding.  He was diagnosed with a thyroid problem and was given medicines. It just got worse. We took him to Chennai where we found out that he has hypopituitarism."

“He is in 4th grade now but he looks like a Kindergarten boy.  He cries when his friends make fun of him."

Haasan is taking medications and now the swelling in his throat has reduced but he needs to take growth hormone injection at least for a year to have normal growth. Doctors have said that the medicines will not make any impact if the family discontinues. Unfortunately, Palani cannot afford it. Hasaan understands that his parents are unable to afford his treatment.

“My son is very good at drawing, I took him to a drawing class when the teacher asked him to sit with the smaller boys he became very sad. I explained to the teacher that he is in 4th grade. He is left alone most of the times. I’m surprised that he is not angry with me for not doing what I should be doing to him. He is waiting patiently and he trusts that he will have injections and grows like other boys of his age” says Palani

Haasan met Abdul Kalam in a function, Kalam was greatly impressed with his talent

Palani is a weaver and he earns Rs 7000 per month on an average. Of late, he is also working as an acting driver after his regular work to earn extra. His friends and Hassan’s teachers are helping him with whatever they could do but still, he cannot start the treatment because it is not sufficient. Growth hormone injection costs Rs 1000 per day and it has to be continued for a year at least. Haasan is waiting with a hope that he can grow normally and live normally like any other children of his age. Only your contributions can save him. 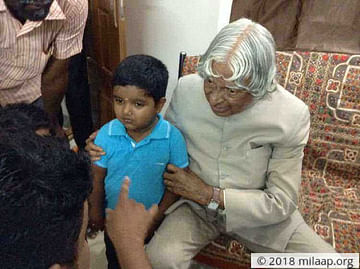 Help 9-year-old Haasan to have a normal growth

He needs to have growth hormone injection for a year. His parents cannot afford the treatment.