First His Body Got Paralyzed, Now His Lungs Are Giving Up On Him Too | Milaap
loans added to your basket
Total : 0
Pay Now

First His Body Got Paralyzed, Now His Lungs Are Giving Up On Him Too

Anoop was 3 years old the first time he fell and was unable to get up on his own. Shilda and Arun, his parents, hadn’t known what to make of it that first time, but when it happened again, they took Anoop to a doctor, who ordered a biopsy to figure out what was happening to their son. When they got the results back, an official diagnosis was made: little Anoop had a rare disease that was affecting his muscles, slowly eating away at them, preventing normal growth.

As Anoop grew up, the disease got increasingly worse. By the time he was 7, he could no longer walk. In another couple of years, he lost the ability to move his arms. He started getting regular seizures, almost one every night. Little Anoop soon became completely confined to his bed and wheelchair, only able to move his head, and some of his fingers. But despite these tragic circumstances, Shilda and Arun never let their son forget that he is still a child.


“He’s just a normal boy. He loves watching cartoons, he loves making jokes. He really loves the rain; so whenever it rains, we take him out so he can play in it. Two months ago, it was his birthday. He usually hates inviting people over because he doesn’t like the way they look at him, but this time he asked, so we got him a little cake, and invited some of his friends. The smile he has when he’s having fun… In that moment, everything is okay, and the world is beautiful.” – Shilda, smiling

As difficult and heartbreaking as little Anoop’s life is, almost just as hard are the lives his parents live. Poor Shilda is Anoop’s full-time carer, by his side from the moment he wakes, to the moment he falls asleep, helping him change, use the bathroom, bathe, eat. And Arun is just a factory worker, working 10-12 hours every day, struggling month-to-month to afford his son’s treatment and medicines. Both parents have dedicated their lives to their son, which is why it was the scariest moment of their lives last month when Anoop had not one, but three seizures back to back.


“Normally, he has one and he recovers. But that night he had three, one after the other… then he didn’t move. When we checked, he wasn’t breathing. We rushed him to the hospital, and the doctors immediately put him on a ventilator. They say the muscles in his lungs are too weak now, and that he’ll need a ventilator for the rest of his life. They even made a hole in his stomach and put a tube there for us to feed him, because he can’t use his mouth anymore.” - Arun, father

Keeping Anoop hospitalized so he can have access to a ventilator is extremely expensive for Arun and Shilda. But if they take him off the ventilator, their son will die. So they have taken Anoop home, and have been renting a portable ventilator from the hospital, but they won’t be able to keep this up for very long. The only option they have left is to buy a portable ventilator of their own, and keep taking care of Anoop at home. But that too is beyond this family’s means.

You are their only hope. They want to save their son’s life, but they can’t afford it. Donate whatever you can, and help ease their financial burden.


The specifics of this case have been verified by the medical team at the concerned hospital. For any clarification on the treatment or associated costs, contact the campaign organiser or the medical team. 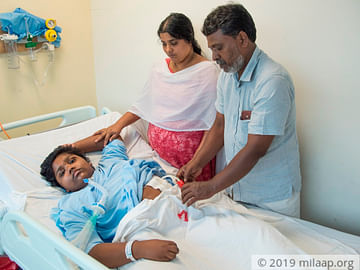 He has been affected by it his whole life, but now it’s killing him

His parents can't afford his treatment and need your help.

UPI: givetoarundas1@yesbankltd (Copy to clipboard)
Or
Click here to read the instructions before you make a bank transfer.