An Urgent Kidney Transplant Can Change This Deaf Teenager’s Life For The Better | Milaap
loans added to your basket
Total : 0
Pay Now

“He was bullied all his life for being deaf and shorter than others of his age. But he was slowly making new friends, trying to live a normal life when his condition became worse than ever. He feels he has no hope now, he cries in silence and apologizes to us for being a burden. It breaks my heart to see our only son going through so much of pain but there is nothing that I can so to save his life," - Sharati, Mother of 17-year-old Manthan

He has been surviving with dialysis all these years, it is not helpful anymore

Manthan was born healthy, he grew up normal and active. When he turned 9, he had hearing problems, slowly he stopped responding at all. When his parents took him to the hospital, they found that he has 80% hearing loss and further tests revealed that his kidney is also affected due to which his growth was stunted. Since then, he is dependent on high dosage of medicines and dialysis for his survival. Last month, he fell sick and was vomiting continuously, they found that 90% of his kidney has failed and it is impossible for him to survive without a transplant.


Manthan is 17 but doens't look his age

"We had to stop sending him to school because he was bullied by his friends, he used to cry all the day. He was learning karate in his school but he had to give up because of his condition. Now he spends his entire day in the four walls of his house, it feels like a punishment for him,"  - Sharati, Mother of Manthan

Manthan’s father is a clerk in post office. He had to spend Rs 20,000 every month for the medical expense and he manages to run the family with whatever little remains. He needs 10 lakhs for the transplant without which he will lose his son. He fears that he will not be able to save his son's life and with each passing day, his condition is getting worse.


"We have been longing to see him live a normal life. He hardly has any good memories, he was all alone most of the times. Now that he is almost bedridden, he is shattered. He has lost all his hope, but how can I give up? Please help me to save his life," - Sanjay, Father.

Your contribution can gift a new life to Manthan 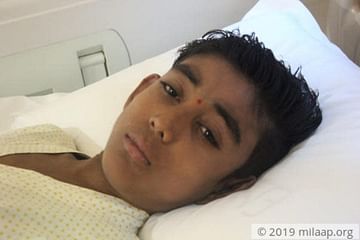 He Feels He Is A Burden To Us, I Wish I Could Tell Him How Much We Want Him To Live

UPI: givetosharatin1@yesbankltd (Copy to clipboard)
Or
Click here to read the instructions before you make a bank transfer.