Manoj Is Determined To Fight Cancer And Start Living His Life Again, You Can Help Him | Milaap
loans added to your basket
Total : 0
Pay Now

Manoj Is Determined To Fight Cancer And Start Living His Life Again, You Can Help Him

Shares
Shares
Share on whatsapp
Manoj had many dreams as he stepped into his twenties. He studied very hard for he knew the hardship that his parents, who are daily wage labourers, went through day in and out. His father earns Rs. 250 per day and his mother Rs.150 per day. The entire family depends on this minimal amount for all their needs. However, poverty did not stop Manoj's parents from dreaming big for their only son.

Manoj's parents did not want his life to be like theirs, they dreamt of a better life for him

Manoj's biggest wish is to earn well and take good care of his struggling parents. They are his inspiration. His mother Chandrama is the strongest woman he knows both physically and mentally. He hasn’t seen her lose hope or give up on her hardship. Even today, she stays just as strong looking after her son who has been diagnosed with cancer.


“Manoj was like any other 21-year-old before this disease. He who loves spending time with friends and family. He loves to travel and wished to take his parents around the world. He's a brilliant student who was pursuing an ITI diploma and further wished to study mechanical engineering. His parents did their best to educate their son and give him a good future.”    – Manoj’s Uncle

Manoj's dreams fell apart 10 months ago when he got to know about his cancer. It had started as a high fever and cough. When Manoj went to the hospital, they asked him to get a blood test done. It was then it was diagnosed that he had Relapsed Acute Myeloid Leukemia commonly referred to as Blood and Bone Marrow Cancer.

If I could give up my own life to save my son, I would

Madesh, Manoj’s father says he feels helpless when he looks at his son. He says if he could give up his life to save his son, he would do it willingly. Unfortunately, the only thing that can save his son is a bone marrow transplant that costs 15 lakhs.


“I used to earn 250 Rupees per day but now since I’m at the hospital with Manoj, I’m not getting even that. I am depending on my brothers for my basic needs like food and travel. Even they are not wealthy enough to do anything more than that. My wife and I give each other hope that our son would be normal again. Doctors say that the treatment to save my son would cost lakhs. Where will I go for so much money? I don’t even know how much is a lakh.” – Madesh, Manoj’s Father

They can only pray for their only son now, but you can do more - you can help save young Manoj.

The specifics of this case have been verified by the medical team at the concerned hospital. For any clarification on the treatment or associated costs, contact the campaign organizer or the medical team.
Click here to save Manoj.
Donate 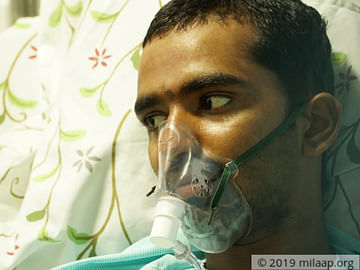 Manoj needs to undergo a bone marrow transplant at the earliest to survive. You can save his life.

UPI: givetomanojfunds1@yesbankltd (Copy to clipboard)
Or
Click here to read the instructions before you make a bank transfer.