Farmer Begs To Save His 11-Year-Old Son Who Is Fighting For His Life | Milaap
loans added to your basket
Total : 0
Pay Now

“We sent him to study in a boarding school 100 kms away from us for his better future but if I knew… If I knew what was coming I would have never let him go… He is all I have.”- Sujatha, mother

After spending a one week long holiday, Jaswanth had happily left for his hostel.  But within a few days, Shekar got a call from his son saying he has severe throat pain and the pain is getting unbearable.

The pain turned proved to something dangerous. Jashwant (11) is suffering from Guillain Barre Syndrome. It is a condition where the immune system attacks the nerves, which is causing Jaswanth intense pain in his entire body. His lungs are also collapsing. Jaswanth is on continuous ventilation and ECMO machine in ICU battling for his life.

The boy who enjoyed cycling so much can't even move an inch of his body, he needs the treatment, at the earliest.

Looking at the seriousness of  Jaswanth's condition, the doctors in their hometown Kurnool, advised the family to immediately take him to Hyderabad. They said it was his only chance.


“He was awake, I kept talking to him on our way to Hyderabad but as we were about to reach... he was gasping for breath,holding his chest and screaming in pain. His eyes were opened wide. I thought he would die, I can’t tell you how it felt. It was as if I had almost lost him," - Shekar, breaking into tears.

We thought he had a bad cold - we were so wrong

"Jaswanth's call had scared me but then I got a call from his school saying he will be fine. They thought it was just a cold, asked us not to worry. But it wasn’t… it wasn’t. I should have taken him to hospital sooner maybe it wouldn’t be this serious...”- Shekar

Shekar is a farmer and has no money  to save his only son from dying. He has nothing left to sell.

“The treatment will cost 20 lakhs more but I have nothing now. Where will I get so much money?”- Shekar, father

You are their only hope. Your small contribution can make a huge difference in their lives. Sujatha and Shekar desperately need your help to save their only child. 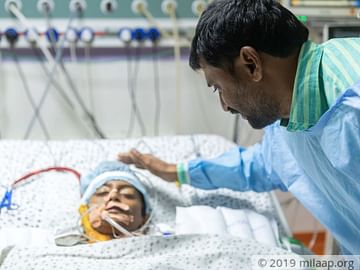 Jaswanth is just 11 and his entire body is paralysed due to a rare disease, he needs help