Lakhan Is Battling Liver Failure, But Still Goes And Teaches At His School | Milaap
loans added to your basket
Total : 0
Pay Now

RM
You are sending a message to
Rajnikant Mishra
Go back

Lakhan Is Battling Liver Failure, But Still Goes And Teaches At His School

Shares
Shares
Share on whatsapp
Lakhan Mishra is the sole bread winner in his family. Lakhan is a Social Studies teacher at Saraswati Vidya Mandir in Ranchi. He has been teaching for over 20 years, and is firm believer that education is extremely important in changing a person’s life.
Currently he is battling liver failure- life threatening. However Lakhan still goes to school and does not want to miss classes.

A family that has already suffered tragedy:

He has been married to Savita Mishra for more than 20 years. They have three children- two daughters and a son. The couple originally had three daughters, but they lost a daughter two years ago, when she died in a road accident.

The loss left the family shattered.

Lakhan is the eldest among his three brothers too. They come from a poor family, and have always considered priorities over luxuries.

He went to a local doctor- but the diagnosis was not clear. He delayed going to another doctor, as it was exam time at his school. It was only when the sickness got worse that Lakhan consulted another doctor. He was then referred to multiple hospitals in different parts of the country. It was only when he visited CMC in Vellore that he was diagnosed with liver failure.

Doctors told him he would need a liver transplant.

Over the last seven months, he has been taking treatment and medicines regularly. He has even been admitted a couple of times. Currently, his condition has worsened. His kidneys are affected as well.
Doctors have now assured him that he can get by with one kidney, but the liver transplant has to be done as soon as possible.

Lakhan has a dangerous illness, but still goes to work

“After all, he has to think about his family. Who will support them if he stays in bed?” – RK Mishra, his nephew.
His family knows that he is sick. His daughters are at an age where they know that something is very wrong with their papa- and they are scared. Lakhan tells them that it is not serious- otherwise, how could he be able to go to school and teach?

How can You help?

Lakhan needs a liver transplant urgently. His wife has undergone the test, and is a perfect match. Doctors will be performing further tests during the second week of August, and will be setting the date for the surgery. The funds have to be ready before the surgery date.
For decades, Lakhan has been shaping the lives of students that attend his classes. He is the pillar of his family- the only person supporting them. He has changed hundreds of lives for the better. Now his family is desperate to save him.
Your contribution can ensure that Lakhan recovers and lives a long healthy life. Help save Lakhan!
Donate 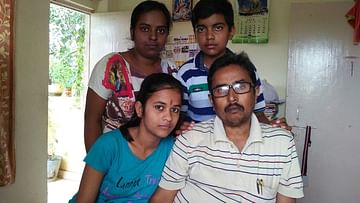 This Teacher From Ranchi Seeks Help to Stay Alive