This 30-Year-Old Met With An Accident While Trying To Save An Animal On The Road | Milaap
loans added to your basket
Total : 0
Pay Now

“My eldest son is fighting for his life in the hospital. With God’s grace he has survived a dangerous accident but now he needs medical care for a long time. We are a family of daily wagers - there is no way we can afford his hospital stay but without that my son will not live,” - Prafula, father.

Kunu was coming home from after celebrating Holi with his friends. He was riding a bike and he had a friend riding behind him. All of a sudden, a buffalo came in front of them and in an attempt to save the animal, Kunu averted the bike. He saved the animal but he couldn’t save himself.


“When we got a phone call from my son’s friends, we couldn’t believe what we heard. My wife and I rushed to take him to the hospital. My son-in-law, who lives in the nearby village, came with us. When we reached the spot, tears rolled out of my eyes. None of us were prepared to see the mangled body of Kunu.”

“We took him to the hospital in Puri but the doctors told us that his condition was serious and he needed to be taken to Bhubaneshwar. It was late that night when we reached Bhubaneswar. There were no seats available in the government hospital, so we had to take him to a private one,” - Prafula.

Kunu’s face had suffered the most of the injury - the trauma of the accident had distorted his face. An immediate surgery was done and he was in the ICU till a few days ago. He is now opening his eyes for a few seconds but is under heavy sedation - the pain is too much for him to bear.

Kunu is the Prafula and Kumari’s eldest son and he is the sole earning member. He works a daily wager and makes about Rs 200 a day. Prafula is too old to work, so sometimes Kumari and Sonu (younger brother) helps Kunu. But even with their combined income, it’s not enough.


“He has a wife and a small child - they have only visited him in the hospital once. Rachana, his wife, begs me to bring him back but I am helpless. I have mortgaged the little piece of land I had and have paid about a lakh. But Kunu needs to stay longer and it would cost us 2 lakhs more. Everyone in my family has already helped as much as they could - now I am looking up to you to save my son.” 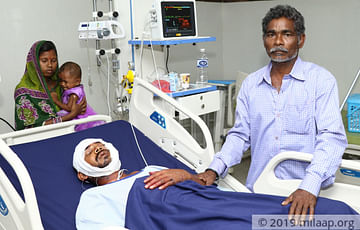 I Don't Have A Single Rupee To Save My Son, Please Help Me

Kunu is the only earning member of his family, without your help he will never get to work