Instead Of Getting A Life-Saving Surgery, This 4-Month-Old Suffers Without Help | Milaap
loans added to your basket
Total : 0
Pay Now

Instead Of Getting A Life-Saving Surgery, This 4-Month-Old Suffers Without Help

Shares
Shares
Share on whatsapp
Last night was the worst for baby Krishna and his parents. They watched as his body turned blue, his chest trembling as he took every breath, at that moment, they almost lost him. Manik ran to his neighbours, called his relatives, begging for help. He knew he had to take Krishna to the hospital. But, he couldn’t.

“We're still at home. He should be in the hospital now. The doctors said that if this happens to him even once, he will need a surgery immediately. But we can’t even afford to take him there. What can I even do now?” – Manik, father

12 years of praying, hoping and yearning

Five months ago, Manik and Swarna’s prayers were finally answered. They were blessed with a baby, after 12 long years of waiting and yearning. Swarna’s pregnancy wasn’t easy either – she had high blood pressure, and had to have a c-section surgery. But all of this seemed worth it when they held him in their arms, their firstborn.


“But he had trouble breathing. The x-ray when he was 1 month old came back normal. When he turned 3 months old, his condition worsened. He started turning blue and getting breathless. He would cry for hours together, sometimes for 3-4 hours, and nothing we did would make him feel better.”

Krishna was admitted to a hospital in Kolkata for pneumonia, but his parents were soon told that he has a hole in his heart. The cure – an urgent surgery.

We took him home knowing anything could happen, but we had no choice

Krishna is now 4-months-old. He needs the surgery as soon as possible, but his parents couldn’t keep him in the hospital any longer. They sold the only piece of gold they had – Swarna’s earrings. They spent over 2 lakhs to get him treated, and now, have exhausted everything.

“Taking home was supposed to be a happy occasion for us, but we live in fear. We took him home knowing that anything could happen at any time, but what else will a poor labourer like me do? I have nothing…nothing to call me own.” – Manik

Even when baby Krishna looks like he’s sleeping peacefully, you can hear the struggle in his breathing. He is never at ease, he never will be if he doesn’t get a surgery in time. Little Krishna is counting on you for help. 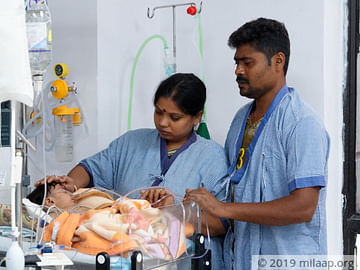 The Longer He Goes Without The Surgery, The Lesser The Chances Of His Survival

Only you can help save this 4-month-old baby with a hole in his heart.